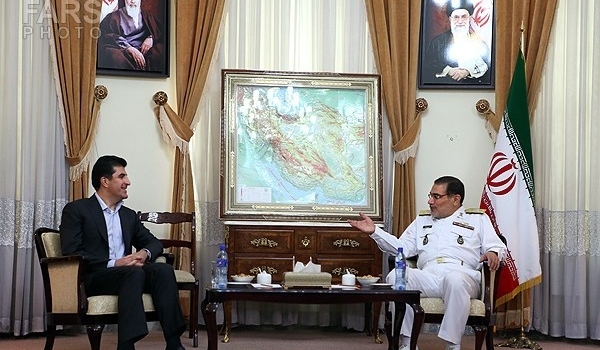 “The current crisis in Iraq is the result of the meddling and collaboration of the western and regional enemies of the Iraqi nation, who are seeking to prevent the Iraqi people’s will and determination from coming into action,” Shamkhani said during the meeting in Tehran on Monday.

He called on Iraqi Kurds, Shiites and Sunnis to become united and defend their country to restore peace, tranquility and security to their country and ward off the danger of terrorism and its spread to the region.

Barzani, for his part, elaborated on the situation in Iraq after the start of the ongoing bloodshed by the terrorists of the Islamic State of Iraq and the Levant (ISIL), and said the Iraqi Kurdistan region will use all its capacities to maintain Iraq’s integrity and solidarity and won’t allow inhumane actions of the terrorists to affect the country’s unity and solidarity.

Barzani arrived in Iran a few hours ago to meet senior Iranian security officials on ways of ending the ongoing bloodshed in his country.

“Iraq enjoys the necessary potential and military preparedness to fight against the terrorist and extremist elements,” she said.

The Iranian foreign ministry spokeswoman also dismissed reports about the deployment of Iranian forces in Iraq, and said, “Any move that complicates the situation in Iraq will not be in the interest of Iraq and the region.”

She also stressed that the Iraqi people and government from all political and religious groups will stand in a unified front to confront the violent, extremist and terrorist elements.

“We believe that the Baghdad government can fully overcome the ongoing crisis in Iraq and thwart conspiracies through consolidation of national unity and internal solidarity,” Afkham added.