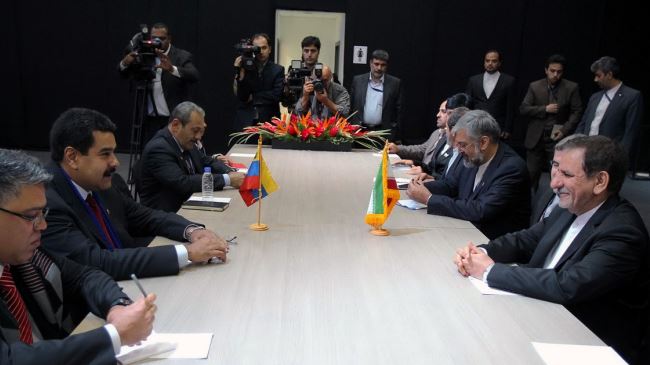 Iran’s first vice president has described as “fundamental” relations between Iran and Venezuela, stressing the need to use the existing potential between the two countries to enhance bilateral ties.

Es’haq Jahangiri made the comments in a Sunday meeting with Venezuelan President Nicolas Maduro on the sidelines of the 50th summit of the Group of 77 (G77) developing countries plus China in Bolivia’s eastern city of Santa Cruz.

Jahangiri said, “Tehran is ready to expand its ties with Caracas at bilateral, regional and international levels.”

The Iranian first vice president termed Venezuela as a good ally for Iran and expressed hope that all agreements already signed between the two countries would be implemented.

Jahangiri further praised Venezuela’s stance regarding Syria, which has been grappling with nearly three years of foreign-backed militancy.

The Iranian official said the steadfastness and resistance of the Syrian nation coupled with the support of friendly states frustrated certain countries that sought to interfere in Syria.

The Venezuelan president, for his part, criticized Western countries for interfering in the internal affairs of the developing courtiers and hailed efforts made by the Islamic Republic to help fulfill the objectives of the G77 and the Non-Aligned Movement (NAM), whose rotating presidency is currently held by the Islamic Republic.

Maduro further praised the “very good” ties between Tehran and Caracas and hoped for the enhancement of bilateral cooperation.

The Group of 77 is a coalition of developing nations, designed to promote its members’ collective economic interests and create an enhanced joint negotiating capacity in the UN. The founding members of the organization were 77 countries; but, by November 2013, the organization’s member states expanded to 133. It was founded on June 15, 1964.

The Group of 77 holds a one-year rotating presidency among Africa, Asia and Latin America. Bolivia holds the chairmanship for 2014.