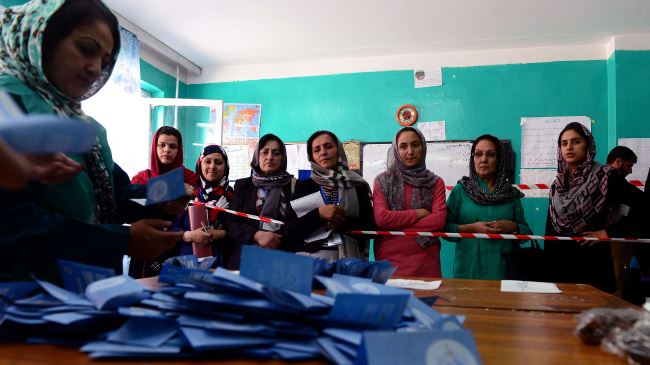 Iran felicitates Afghans on 2nd round of election

Afghan election commission workers sort ballot papers at a polling station in Kabul after polls draw to a close on June 14, 2014.

Iran has offered congratulations to the Afghan nation and government on the second round of presidential elections in the country, saying Tehran will keep up support for the future Afghan leader.

On Sunday, Iranian Foreign Ministry Spokeswoman Marzieh Afkham praised the democratic transition of power in neighboring Afghanistan and said, “The president-elect of the Afghan nation will enjoy the Islamic Republic of Iran’s respect and support.”

Iran is determined to strengthen its ties with Afghanistan, said Afkham, adding the recent vote, which saw the epic participation of Afghan people, will pave the way for enhanced cooperation between Tehran and Kabul on the issues of bilateral, regional and international significance.

Afghans went to the polls on June 14 to choose the successor to outgoing President Hamid Karzai between former Foreign Minister Abdullah Abdullah and economist Ashraf Ghani. The results are expected to be announced on July 2.

During the first round, Abdullah secured 45 percent of the vote, while Ghani received 31.6 percent after investigations into fraud claims for both sides.