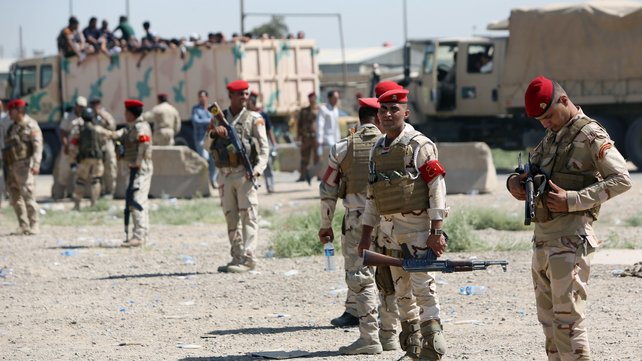 Iraqi security forces have killed 279 “terrorists” in the past 24 hours, as they push back against a major Sunni insurgent offensive, a spokesman said.

Iran warned on Sunday that “any foreign military intervention in Iraq” would only complicate the crisis, after the US said it was deploying a warship in the Gulf.

“Iraq has the capacity and necessary preparations for the fight against terrorism and extremism,” foreign ministry spokesman Marzieh Afkham was quoted as saying by the ISNA news agency.

“Any action that complicates the situation in Iraq is not in the interests of the country nor of the region,” Afkham said.

“The people and government of Iraq will be able to neutralise this conspiracy.”

Iraq is battling an offensive by Sunni militants, including the Islamic State of Iraq and Syria (ISIS), who have advanced to within 80km of Baghdad’s city limits after seizing a swathe of the country’s north.

ISIS is also known as the Islamic State in Iraq and Levant (ISIL) and the group’s aim is to create an Islamic caliphate encompassing Iraq, Syria and Lebanon.

Responding to the crisis, the Pentagon said the United States had ordered an aircraft carrier, the USS George HW Bush, into the Gulf.

Mr Afkham’s comments come a day after President Hassan Rouhani said he believed the Iraqis have the capacity to “repel terrorism” and that Iran had not been asked for help by its neighbour.

But in surprise comments he added that Iran may consider cooperating with its arch-foe the United States to fight the Sunni extremist militants in Iraq.

“If we see that the United States takes action against terrorist groups in Iraq, then one can think about it,” he said, despite the lack of diplomatic relations between Tehran and Washington for more than three decades.

“We have said that all countries must unite in combating terrorism. But right now regarding Iraq… we have not seen the Americans taking a decision,” Rouhani added.

The deployment of the aircraft carrier was ordered by US Defence Secretary Chuck Hagel and comes amid calls for air strikes to blunt the insurgents’ lightning offensive that caught Iraq’s security forces on the hop, with many soldiers throwing away their uniforms and fleeing.

The US is “committed” to supporting Iraq as it battles Sunni militants who have seized a swathe of the country’s north, Secretary of State John Kerry told his Iraqi counterpart.

US President Barack Obama said he was “looking at all the options” to halt the offensive that has brought the militants within 80km of Baghdad’s city limits, but ruled out any return of US combat troops.

A US carrier group was ordered into Gulf waters.

“Assistance from the United States would only be successful if Iraqi leaders were willing to put aside differences and implement a coordinated and effective approach to forge the national unity necessary to move the country forward and confront the threat of ISIL,” or the Islamic State in Iraq and the Syria, it added.

He urged the Iraqi government to ratify election results “without delay,” form a new government on time and to respect the rights of all its citizens from various religious and ethnic backgrounds.

“The secretary assured the foreign minister that the United States was reaching out to the international community and Iraq’s regional neighbours to emphasize the threat that Iraq and the region are under from ISIL and the importance of coming to Iraq’s aid at this critical juncture,” the State Department said.

Mr Obama has been under mounting fire from his Republican opponents over the swift collapse of Iraq’s security forces, which Washington spent billions of dollars training and equipping before pulling out its own troops in 2011.

Such is the crisis that Shia Iran offered to consider helping longtime foe Washington if it takes the lead in repelling the Sunni Arab militants’ advances.

Violent insurgency in Iraq is the “predictable” result of the West’s failure to intervene in Syria, not of the 2003 invasion to topple Saddam Hussein, Tony Blair has declared in a renewed call for military action.

The former prime minister’s intervention in the debate comes amid international moves to tackle the bloody insurgency by Islamist extremists and deal with its humanitarian consequences.

Thousands have fled the sweeping advance of fighters from the al-Qaida-inspired Islamic State of Iraq and Syriua (ISIS), who have taken control of large areas including second city Mosul.

ISIS is also known as the Islamic State in Iraq and the Levant (ISIL), and the group’s aim is to create an Islamic caliphate encompassing Iraq, Syria and Lebanon.

US president Barack Obama is considering a range of military options – said to include air strikes – over the coming days.

Meanwhile Iran – a key ally of Nouri al-Maliki’s Shia-dominated administration in Baghdad – indicated that it was ready to provide assistance.

Mr Blair rejected as “bizarre” arguments that Iraq would be more stable and peaceful today if the US-backed war had not happened.

He said that unless the international community was prepared to overcome public reluctance and confront the extremists “hard, with force”, the consequences would be more serious still.

Mr Blair – now a Middle East peace envoy – said Iraq was “in mortal danger” but pinned the blame on the sectarianism of the Maliki government and the spread of Syria’s brutal three-year civil war.

He hit back at critics of the controversial war in an eight-page essay on his website, saying al-Qaida had been a “beaten force” in Iraq as recently as three years ago, but the chance of peace was squandered by Baghdad.

“By all means argue about the wisdom of earlier decisions,” he wrote.

“But it is the decisions now that will matter.

“The choices are all pretty ugly, it is true. But for three years we have watched Syria descend into the abyss and as it is going down, it is slowly but surely wrapping its cords around us, pulling us down with it.

“We have to put aside the differences of the past and act now to save the future.

“Where the extremists are fighting, they have to be countered hard, with force.”

It did not mean another invasion, he said.

“There are masses of responses we can make short of that. But they need to know that wherever they’re engaged in terror, we will be hitting them.”

He said the Iraq assault had been planned and prepared in the Syria conflict zone and was the “predictable and malign effect” of allowing that situation to be exploited by extremists.