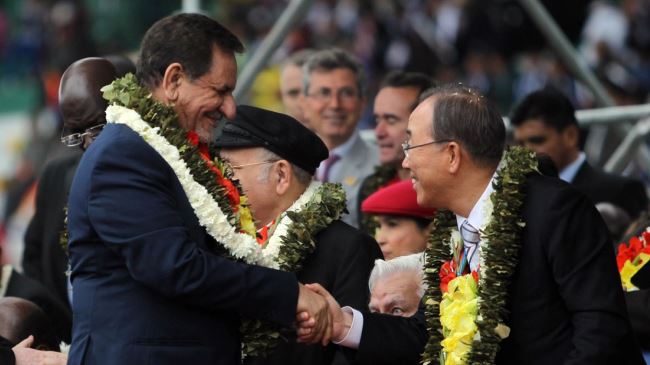 Iran’s First Vice President Es’haq Jahangiri has called on the United Nations to take more serious measures to counter terrorism and extremism in Iraq and Syria.

“The international community, particularly the United Nations, must act more seriously in this respect in order to replace terror and extremism with dialog,” Jahangiri said in a meeting with UN Secretary General Ban Ki-moon in Santa Cruz, Bolivia, on Sunday.

He added that terrorists, supported by certain countries, are creating havoc in the region.

“The Iraqi government needs international support to put an end to the violence [in the country]. Otherwise, extremist groups will also infiltrate other regional countries,” the Iranian official said.

On June 10, the terrorist Islamic State of Iraq and the Levant (ISIL) took control of Mosul, which was followed by the fall of Tikrit, located 140 kilometers (87 miles) northwest of the capital, Baghdad. Hundreds of thousands of people have been forced out of their homes since that time.

The ISIL militants have vowed to continue their raid toward the capital, Baghdad. Iraqi Prime Minister Nouri al-Maliki has said that the country’s security forces would confront the terrorists, calling the Mosul seizure a “conspiracy.”

The Iraqi premier has blamed Saudi Arabia and Qatar for the security crisis and growing terrorism in his country, denouncing the Al Saud regime as a major supporter of global terrorism.

Jahangiri further reiterated Iran’s commitment to all its undertakings in accordance with the Geneva nuclear deal reached between Tehran and the P5+1 in November, 2013 and said the Iranian nation would never give up its rights.

“We believe that if the negotiating countries put aside excessive demands, we will reach favorable outcomes. We have increased our cooperation with the International Atomic Energy Agency (IAEA) and are ready to show our full transparency,” the vice president pointed out.

The UN chief, for his part, praised the progress made in Iran’s nuclear issue and hoped the two sides would show more flexibility to reach desirable outcomes.

He expressed hope that sanctions against Iran would be lifted and the country would achieve economic development.