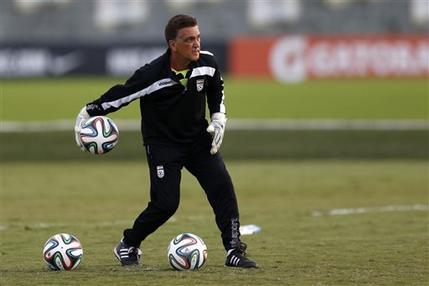 Pride at stake for Iran at World Cup

FILE – In this June 8, 2014 file photo, Iran goalkeepers coach Dan Gaspar works with goalies after an international soccer friendly against Trinidad and Tobago in Sao Paulo, Brazil. The 58-year-old Gaspar is from Connecticut. His players, however, speak mostly Farsi. (AP Photo/Julio Cortez, File)

SAO PAULO (AP) — Iran’s goalkeeping coach Dan Gaspar says the team will earn the respect of soccer fans around the world with its performance against Nigeria in their World Cup opener on Monday.

Iran heads into the Group F match at Curitiba with only one previous victory at a World Cup, against the United States in 1998.

The American added that “this team is prepared to sacrifice, to suffer, to fight with humility” during its stay in the tournament.