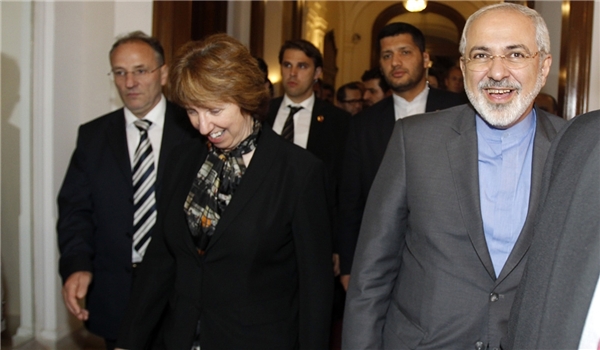 The fifth round of negotiations between Iran and the Group 5+1 (the US, Russia, China, Britain and France plus Germany) is due to take place in Vienna on June 16 to 20.

Zarif and Ashton have decided to meet each other for a luncheon at Iran’s office at the International Atomic Energy Agency (IAEA) headquarters in Vienna on Monday to discuss the latest developments in the talks between Tehran and the six world powers.

They will then decide if they should start the multilateral negotiations among the seven nations on Monday or Tuesday.

A senior Iranian delegation headed by two of Zarif’s deputies, Seyed Abbas Araqchi and Majid Takht Ravanchi, held separate bilateral meetings with most members of the G5+1 in Geneva and Rome earlier this week.

The Iranian team also held bilateral talks with the French negotiators in Geneva on Wednesday.

Araqchi said the Iranian and French teams of negotiators had over 3 hours of useful talks in a positive atmosphere.

He said that the two sides discussed issues related to the nuclear talks as Iran and the Group 5+1 are preparing for the next round of talks in the Austrian capital.

Meantime, the German’s top envoy to the Iran-Group 5+1 talks Hans Deiter Lucas arrived in Tehran on Friday to meet his Iranian counterparts.

In November 2013, Iran and the world powers signed an interim nuclear deal in the Swiss city of Geneva that came into force on January 20. The deadline for attaining a final deal is July 20.