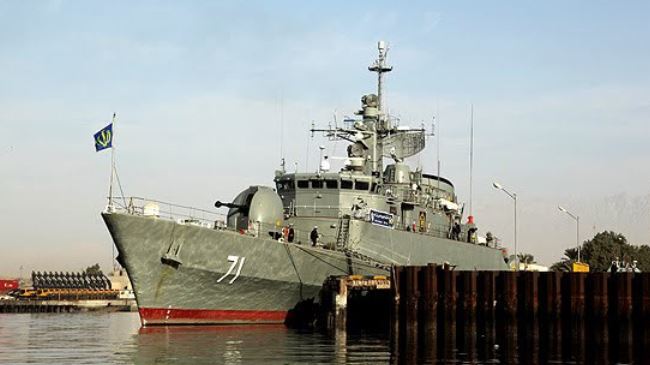 Alvand frigate (shown in the picture) is part of the 30th Fleet of the Iranian Navy.

The 30th Fleet of the Iranian Navy has docked at Tanzania’s Port of Dar es Salaam in line with the Islamic Republic’s strategy of expanding its naval presence in international waters.

The flotilla, comprised of the Alvand frigate and Bushehr light replenishment ship, arrived at the port on Thursday after accomplishing its missions in the Gulf of Aden, Bab el-Mandeb Strait and the Red Sea, Iranian Navy Commander Rear Admiral Habibollah Sayyari said.

This is the first time the fleet has entered the southern Indian Ocean and it will stay in Port of Dar es Salaam for three or four days, the commander underlined.

Sayyari said the 30th Fleet of the Iranian Navy conveys the message of peace and friendship to the nation, and it would either return to the Gulf of Aden or sail toward South Africa after its stopover in Tanzania.

On June 2, Iran’s 30th fleet thwarted two pirate attacks against an Iranian vessel in Bab-el-Mandeb Strait. A month earlier, the fleet had foiled a pirate attack on an Indian oil tanker dubbed Jok Lok as the vessel was heading toward the Suez Canal through the Red Sea.