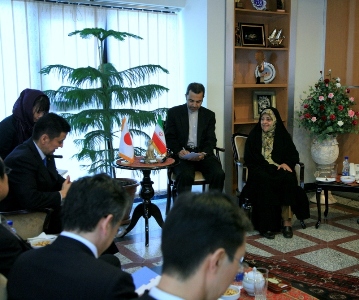 Tehran, June 10, IRNA – Head of Department of Environment (DoE) Masoumeh Ebtekar said Tuesday that promoting Iran-Japan ties based on common cultural grounds will lead to better cooperation in all the fields, the environment sector in particular.

She made the remarks in a meeting with the Japanese Senior Parliamentary Vice Minister of Foreign Affairs Nobuo Kishi who is currently in Tehran at the head of a delegation.

Appreciating Japanese government for financial support at the tune of one million dollars to rescue Orumiyeh Lake, Ebtekar further noted that countering air pollution, draught and global warming are the areas of environmental cooperation between Iran and Japan.

Iran is ready to use Japanˈs experience in these fields, she said, adding that water shortage, draught and air pollution are the major challenges facing the Iranian environment.

Unfair sanctions against Iran, global warming and climate change are the main factors responsible for the challenges, Ebtekar said.

She said that status of women must be promoted and their social presence is vital and an area of mutual cooperation.

Ebtekar said that a delegation of Japanese women activists involved in charity affairs will soon travel to Iran.

Kishi, for his part, said that he has been assigned by the Japanese government to pursue the agreements earlier signed by the two countries and pave the way for boosting bilateral ties.

ˈJapan is ready for cooperation with Iran is all the fields, the environment in particular,ˈ he said.

Referring to the Japanese governmentˈs one-million-dollar assistance to help save Orumiyeh Lake, Kishi voiced the governmentˈs readiness to extend further financial and executive support to the relevant projects.

Recalling Ebtekarˈs statement on global warming, he said that ˈEnvironment is a global issue and all the countries should struggle to remove the challenge facing the world.ˈ

Lauding Ebtekarˈs activities in different fields as a successful Muslim woman, Kishi hoped that the meeting will help promote cooperation with the Islamic Republic of Iran in women-related fields.