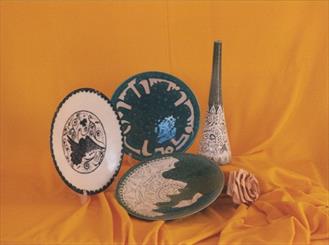 SHAHRUD, June 10 (MNA) – Shahrud has been given the name of ‘the land of 5 climates’ for its many geographical features.

Located in a relatively small region, Shahrud is comprised of desert, sabulous terrain, steppe, knoll hills, mountains, forest, and rivers, which have fostered the diversity of handicrafts.

Shahrud with 41,000 square kilometers is located in southern slopes of eastern Alborz where it is stretched to the wastes of central desert of Iran. With the declining height, the region’s climate changes dramatically, giving the region different climate and ecosystem, and with it the diversity of housing, culture, traditions and other anthropological features, including diversity of dressing and handicrafts.

Pottery is an important craft in the city. Other handicrafts included woven materials of Kalateh Khij, the variegated colorful jajim of Majn, and women’s sewing in the desert village of Khartouran. Pottery is common in the city using the rich soil of the region and with the innovation of the artists which creates objects of beauty. People also work in ceramics industry. They produce kitchen appliances and other works of art in their casting workshops.

The city is a leading pole in pottery across the country. Weaving gelim is also a handicraft practiced in the regions located in the edge of desert. Women in nomadic tribal regions of Rezaabad, Khartouran (a frequent tourist destination) are among the most skilled weavers of gelim. In recent years, training workshops under the aegis of Cultural Heritage Organization has helped gelim weaving a common practice across Shahrud.

Traditional method weaves gelim in cantilevers fixe on the ground. The designs in the gelim are inspired by the immediate nature of the weavers, and often incorporate animals, birds, traditional nomadic siahchador (main residence place of the nomads), and other geometrical shapes. Jajim is the most beautiful and heavily adorned woven handicraft of the city. It is more common in mountain regions of Mojn. Skilled women tailor beautiful designs on the jajim having spun sheep wool and colored it in traditional workshops. The people of Mojn call this jajim of fine weaving ‘Gelich’ in local dialect.

Woodcarving is also common in Shahrud. Creating intaglios and cameos on wood using iron tools to decorate Quranic verses and other beautiful Arabesque designs is also common. In Dehmolla and Rahanjan villages, craftsmen adorn buffet tables and furniture various accessories. Their products have markets inside Iran and they are also exported. In Shahrud and nearby villages, masters of woodcarving usually create panels of exquisite beauty. The art of felting is also a common craft in the city. Felt is the product of long rubbing action by hand and applying water and soup solution to the batted sheep wool. The finished product is used as pastors’ garment and mats.

Abrsaj hosts most of the felting centers, where it provides the demands of other parts of the country. Craftsmen and women use dyed wool for adorning the felt and adding more beauty. In Khartouran Biarjmand in southeastern part of Shahrud, which include villages Asbkoshan, Qale’ Bala (Upper Castle), Givar, Dezian, Rezaabad, and the city of Mojn in northwest, the beautiful art of needlework is common.

Kaktarashi (the art of carving objects and shapes out of wood) is also a handicraft in Abar; local attire production and jewelry in Shahrud, Mojn, Kalateh Khij, and villages Sotouh and Bidestan; palaz weaving in Khartouran and Bastam; cupper engraving, arabesque, mosaic and lattice on wood and copper, gemstones carving, black and copper smithing, wood turning are common crafts in Shahrud.