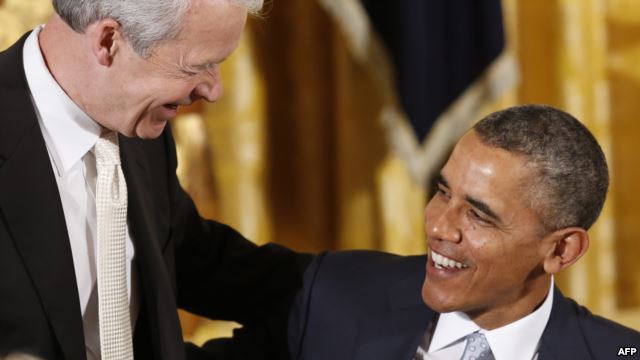 Joel Hunter, a spiritual adviser to U.S. President Barack Obama, recently spent about a week discussing religious tolerance with officials in Iran, a country often singled out by rights groups for its intolerance toward its religious minorities.

Hunter, a senior pastor of Northland Church in Florida who led a delegation of U.S. religious leaders to the Islamic republic, says he was invited by Iranian religious leaders and scholars to attend a conference.

The conference titled “World Free of Violence and Extremism from the Perspective of Abrahamic Religions” was held in Tehran on May 25.

Hunter, who describes himself as someone who helps Obama get closer to God, says he will brief the U.S. President on his trip, which included a visit to the holy city of Qom.

Hunter’s visit to Iran is likely to be castigated by hard-liners in the country as well as critics in the United States who oppose engagement efforts with an Islamic establishment that has been accused of serious human rights abuses.

A conservative Iranian website questioned the trip on June 2 and asked authorities whether it had been coordinated with the country’s security and intelligence bodies.

“Is this trip part of the project to make ‘America look good’ by the pro-Western faction to send positive impulses to U.S. officials?” Jahannews.com asked.

Despite the criticism, Hunter says the trip was worth it.

“That’s part of how we make progress, is that those of us who know we’re going to be blamed by some of the hard-liners, for even having these conversations,” he said. “We believe it’s worth the risk because we’re not going to make progress as countries or even as religious communities for not talking to one another.”

He added that religious extremism and violence as well as a faith-based path to peace were among the main topics he discussed with Iranian officials.

Asked whether he raised the issue of Iranian state pressure on religious minorities, including Christian converts, Hunter said those subjects were discussed in “sidebar conversations”.

In his latest report, Ahmed Shaheed, the United Nations Special Rapporteur on the Situation of Human Rights in Iran, noted that religious minorities in the Islamic republic, including Baha’is and Christians, face violations entrenched in law and practice. Sufis are reportedly also coming under increasing pressure by the Iranian establishment and hard-line clerics who describe the Sufi interpretation of Islam as deviant.

“We didn’t go over there to confront people on certain issues,” said Hunter. “But…we have built enough of a relationship to address those specific conversations and we talked through those together, and what steps we could do to build a better environment.”

Pastor Hunter also said that he was aware that his trip could be used for propaganda purposes by Iranian officials who often claim that all the country’s citizens enjoy the same rights.

“Everybody will use our trip for propaganda purposes,” he said. “It’s the nature of the beast, that’s what politics is.”

Hunter said he believes religious leaders can play a role in decreasing tensions between the United States and Iran.

Washington broke its diplomatic ties with Iran following the 1979 revolution and the hostage-taking of U.S. diplomats in Tehran.  In the past 35 years, the two countries have been at odds over a number of issues, including Iran’s support for terrorism and its controversial nuclear program.

In recent weeks, Iran and the United States, as well as other world powers, have been engaged in talks aimed at finding a lasting solution to the crisis over Iran’s sensitive nuclear work.

According to Hunter, certain areas, including religious violence and persecution, can only be solved through dialogue among religious leaders.

“We believe that we have something in common and out of the commonality of our religious communities, we can build the kind of relationship and trust that politics simply can’t,” he said. “Only through religious leadership or the exchange of religious leaders, we believe peace is going to be successfully built between our two countries.”

In an email to RFE/RL, a State Department official said that the United States is aware of independent initiatives by various U.S. religious figures to foster interfaith dialogue with Iranian religious scholars.

“We commend such efforts to promote interfaith tolerance and religious freedom, a foreign policy priority for the Department,” the official said.

The official added that Washington was also aware that a small delegation of U.S. Catholics visited Iran in March, entirely independent of the U.S. government.