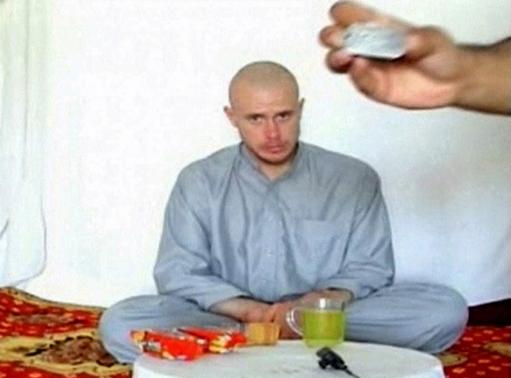 U.S. Army Private Bowe Bergdahl watches as one of his captors display his identity tag to the camera at an unknown location in Afghanistan in this July 19, 2009 file still image taken from video.

(Reuters) – T he sole American prisoner of war held inAfghanistan was flown to a U.S. military hospital in Germany on Sunday, after he was dramatically freed in a swap deal for five Taliban militants who were released from the Guantanamo Bay prison in Cuba.

Army Sergeant Bowe Bergdahl had been held for nearly five years and his release, following years of on-and-off negotiations, suddenly became possible after harder-line factions of the Afghan Taliban shifted course and agreed to back it, according to U.S. officials.

A U.S. defense official said Bergdahl was able to walk and became emotional on his way to freedom, after being handed over to U.S. special forces in eastern Afghanistan on Saturday.

“Once he was on the helicopter, he wrote on a paper plate, ‘SF?'” the official said, referring to the abbreviation for special forces. “The operators replied loudly: ‘Yes, we’ve been looking for you for a long time.’ And at this point, Sergeant Bergdahl broke down.”

U.S. Defense Secretary Chuck Hagel said he hoped the successful prisoner exchange deal might lead to breakthroughs in reconciliation with the militants.

“We had been … working to find ways to open up some possibilities with the Taliban to try to get Sergeant Bergdahl back. This didn’t just start,” Hagel told reporters traveling with him on a routine visit to Afghanistan.

“This has been an ongoing effort that our government has been involved in at every level … We found some openings … that made sense to us,” he added. “The timing was right, the pieces came together.”

Hagel later met with more than a dozen special operations soldiers at the giant Bagram military base outside Kabul and thanked them for their part in operations to recover Bergdahl.

Addressing a larger gathering of troops in a hangar at the base, Hagel said, “This is a happy day for our country, because we got one of our own back.”

Bergdahl, 28, was handed over about 6 p.m. local time on Saturday, a senior official said. The U.S. forces, who had flown in by helicopter, were on the ground very briefly, said the officials, who would not specify the precise location.

“Fortunately … no shots were fired, there was no violence,” said Hagel. “It went as well, not only as we had expected and planned but I think as well as it could have.”

The commander of U.S. and NATO forces in Afghanistan, General Joseph Dunford, spoke of the sense of excitement that swept the headquarters of the international military force there as news of the successful operation filtered through.

“You almost got choked up,” he said. “It was pretty extraordinary. It has been almost five years and he is home.”

President Barack Obama hailed the release in a brief appearance with Bergdahl’s parents, Bob and Jani, in the White House Rose Garden, saying that “while Bowe was gone, he was never forgotten”.

Bergdahl had already left Afghanistan when Hagel touched down at Bagram on Sunday, and a U.S. defense official later said the newly released POW had arrived at Landstuhl Regional Medical Center in Germany.

Another defense official said it was expected that after treatment in Germany he would be transferred to another military medical facility in San Antonio, Texas.

Bergdahl, who is from Idaho, was the only known missing U.S. soldier in the Afghan war that was launched soon after the Sept. 11, 2001 attacks on the United States to force the Taliban – accused of sheltering al Qaeda militants – from power.

He was captured under unknown circumstances in eastern Afghanistan on June 30, 2009, about two months after arriving in the country.

In exchange for Bergdahl’s freedom, the U.S. released five Taliban detainees from Guantanamo. They were being flown by U.S. military aircraft to Qatar, the Gulf emirate that acted as an intermediary in the negotiations.

Qatari Foreign Minister Khaled al-Attiyah declined to give details about the conditions attached to the Taliban prisoners’ release, saying only that Qatar got involved in the case because it was a “humanitarian cause”.

“The negotiations were long but we managed to succeed,” he told a news conference in Doha.

U.S. officials referred to the release of the Taliban detainees as a transfer and noted they would be subject to certain restrictions in Qatar. One of the officials said that would include a minimum one-year ban on them traveling outside of Qatar as well as monitoring of their activities.

Those assurances were greeted with scepticism by U.S. Republicans and some Afghan officials, who voiced concerns that the men, who were described as senior Taliban figures, would rejoin the insurgency against the government in Kabul.

“They will be very dangerous people, because they have connections with regional and international terror organizations around the world,” a top Afghan intelligence official told Reuters.

That view was echoed on the streets of Kabul. “It will strengthen the insurgency,” said Sayed Najibullah, a tailor in the Afghan capital. “President Obama showed that his soldier’s life was more important than a country’s national interest.”

There was no immediate comment from the government of Afghan President Hamid Karzai, who Hagel said had not been informed of the prisoner exchange in advance.

Bergdahl’s release came days after Obama outlined a plan on Tuesday to withdraw all but 9,800 American troops from Afghanistan by the end of the year and the rest by 2016, ending more than a decade of U.S. military engagement.

A U.S. official said he did not see a link between the agreement and Obama’s announcement. “This predates the decision on troops. This is just a matter of this coming together with the help of the Qataris and the Taliban realizing that we were serious.”

The U.S. had been trying diplomacy to free Bergdahl since late 2010, but talks had been complicated, U.S. officials said, by an internal split between Taliban factions willing to talk to Americans and those staunchly opposed.

The Afghan Taliban confirmed on Saturday it had freed Bergdahl near Khost province which borders Pakistan. “This is true. After several rounds of talks for prisoners’ swap, we freed U.S. soldier and our dear guest in exchange of five commanders held in Guantanamo Bay since 2002,” a senior Taliban commander said.

The Taliban commander said Bergdahl had mostly been held in the tribal areas betweenPakistan and Afghanistan.

While U.S. and Taliban envoys have met directly in the past, there were no direct U.S.-Taliban contacts during the most recent negotiations, U.S. officials said. Messages were passed via Qatari officials.

The final stage of negotiations, which took place in the Qatari capital, Doha, began a week ago, the U.S. officials said. Obama and Qatar’s emir spoke on Tuesday and reaffirmed the security conditions under which the Taliban members would be placed, they said.