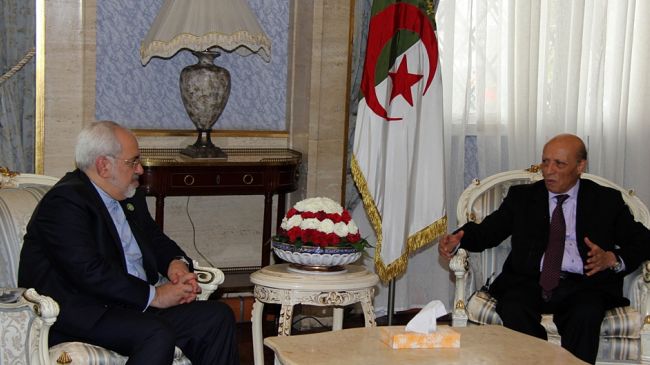 The Iranian foreign minister says the Islamic Republic is ready to cooperate with independent and moderate countries in the campaign against extremism and violence.

Mohammad Javad Zarif, who is in Algeria to participate in the 17th Non-Aligned Movement (NAM) foreign ministerial conference, made the remarks in a meeting with Speaker of Algerian National People’s Assembly Mohamed Al-Arabi Ould Khalifa on Wednesday.

The top Iranian diplomat said Tehran and Algiers have pursued the policy of moderation and have common ground on many regional and international issues.

He then reiterated the Islamic Republic’s opposition to any military intervention in Syria, noting that the political solution to the crisis should be based on realities on the ground in Syria.

Zarif further expressed satisfaction over the growing trend of Tehran-Algiers ties, describing parliamentary cooperation between Iran and Algeria as an important factor in the enhancement of relations between the two countries.

The Algerian parliamentary official, for his part, termed Tehran-Algiers ties as very close and age-old.

He highlighted Iran’s status in the region and said there are ample grounds for the expansion of Algiers-Tehran ties.

Referring to the more than three years of bloody turmoil in Syria, Khalifa said the conflict must be resolved through dialog and that the continuation of crisis would result in the spread of terrorism and insecurity.

Also on Wednesday, the Iranian foreign minister held a separate meeting with his Omani opposite number Yusuf bin Alavi bin Abdullah in Algiers, where both sides underscored the need for the promotion of the NAM for the establishment of peace and security in the world.

The two sides also discussed issues of mutual interest and reviewed the latest developments regarding the follow-up and implementation of the agreements signed between Iran and Oman.