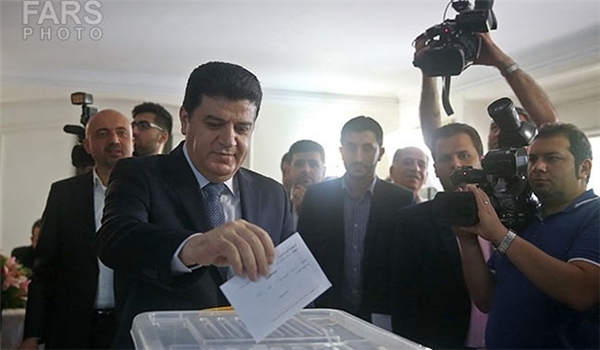 Syrian envoy to Tehran: Presidential election translation of people’s will

TEHRAN (FNA)- Syrian Ambassador to Iran Adnan Mahmoud said the presidential election in his country is a manifestation of the Syrian people’s will, stressing that the West is afraid of the people’s judgment.

Speaking in an exclusive interview with FNA on Wednesday, Adnan Mahmoud said that the Syrian people’s participation in the presidential election means that they want to determine the country’s fate through the ballot box.

Underlining the advancing trend of democracy in his country, he pointed out that it is the first presidential election in Syria where three candidates are competing with each other very freely.

The ambassador also said that “holding elections at the Syrian Embassy in Tehran and our embassies around the world is a translation of the Syrian people’s will through the ballot boxes, as it also represents their national choice for the next stage, on top of which is restoring stability to the country and adhering to sovereignty and national unity”.

By voting in the election, Syrians are telling the terrorists and their western supporters that it is the people’s national will that is going to set the fate of their country.

As several western countries and the UAE in a not much surprising move have banned the election and prevented the Syrian embassies from setting up polling centers on their soil, Mahmoud said the western countries’ rejection of the presidential election shows that they are afraid of the Syrian people’s opinion, democracy and respect for people’s will.

Elsewhere, he said no matter who wins the election, “Syria’s stance on resistance (against Israel and the bullying West) will not change”.

Syrian expatriates throughout the world headed to their country’s embassies and diplomatic centers abroad on Wednesday to cast their vote in a highly controversial election.

As several western states, including France, Germany, Austria and Belgium, as well as the UAE have banned polling at the Syrian embassies, expats in Tehran went to the embassy to take part in the election.

Voting for the Syrians inside the country will start on June 3.