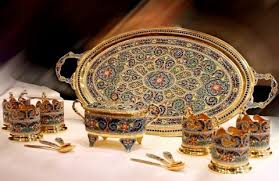 Darvish Amiri added that people should cooperate with ICHHTO in protecting these valuable monuments.

“People should consider themselves major custodians of the monuments. If they don’t cooperate in keeping the historical monuments, climatic conditions and burglary would threaten the monuments,” the English-language paper ˈIran Dailyˈ published Monday quoted Amiri as saying recently.

Amiri noted that Soltanieh Dome in Zanjan province dates back to 750 years.

“There are only two other similar domes in Italy and Turkey. The Iranian dome has been severely damaged due to negligence,” he said.

Some 450 handicrafts have been registered worldwide, of which 350 pertain to various eras of Iran.

Amiri noted that Iran can become a top country in pilgrimage tourism. It enjoys high potentials for achieving success in the international halal food market.

Mohammad Hosseini, the head of Markazi Cultural Heritage, Handicrafts and Tourism Department, said a comprehensive tourism plan has been discussed for the first time in Markazi province.

Hosseini added that the department seeks to complete 100 semi-finished projects, cede costly monuments to the private sector and establish Handicrafts Township in the current Iranian year (to end March 2014).

Mohammad Hossein Moqimi, Markazi governor general, said craftsmen involved in the handicrafts sector complain about the absence of an exhibition for showcasing and selling their artworks.

Markazi Cultural Heritage, Handicrafts and Tourism Department should launch such a site for them.

“Arak Bazaar is a symbol of 250 years of history of the city,” he said. “However, many covered passageways and shopping centers in the bazaar are exposed to destruction due to negligence of merchants and respected officials.”

Jamalnejad added that tourism is followed by agriculture, industry and services. He said religious tourism differs from other types of tourism.

“Islam has considered special tasks and moral issues for religious tourism, which has been manifested in the principles of traveling,” he said.

“Apart from private aspects, it regards social dimension of tourism. Religious tourism has managed to materialize goals such as social unity of Muslims,” he concluded.