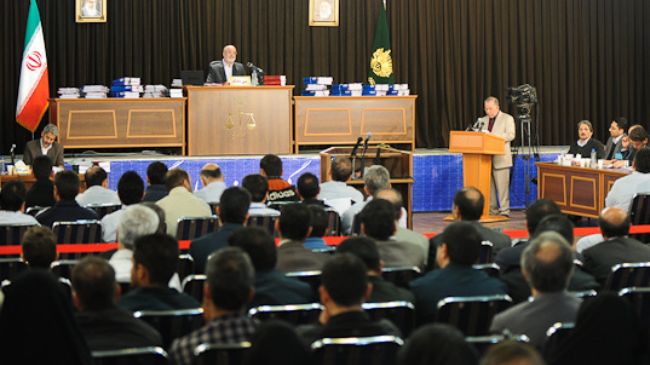 Iran’s authorities have executed a billionaire businessman over his central role in a $2.6 billion bank fraud that rocked the country’s economy and political system.

State TV said Mahafarid Amir Khosravi was hanged early Saturday in Evin Prison in Tehran. He was convicted of forging letters of credit with the help of high-level bank managers to get loans from Iran’s largest financial institutions.

Khosravi, who built his fortune in banking and railroads, then set up companies with the money.

The businessman was one of more than 30 defendants who finally faced trial in the case, which raised tensions between President Ahmadinejad and his opponents as Iran’s economy declined.

Iran is still seeking the extradition of Mahmoud Reza Khavari, the former head of Bank Melli, who fled to Canada soon after the bank fraud was exposed in September 2011.

In an even higher-profile case, billionaire tycoon Babak Zanjani has publicly admitted that he worked with the Ahmadinejad Government to circumvent international sanctions.

Zanjani was arrested last autumn. He is accused of taking money from the Iran’s Social Security Funds, then headed by senior Ahmadinejad advisor Saeed Mortazavi, to support and set up his companies. The Oil Ministry also says he took more than $2 billion of its funds.

Sassan Soleimani, the director of a version of the ”Happy in Tehran” video that has angered Iranian authorities, is still reportedly in Rajaee-Shahr Prison in Karaj.

Six participants in the YouTube video, in which people celebrate their lives by dancing to Pharrell Williams’ “Happy”, were briefly imprisoned earlier this week. They were released on bail to make “confessions” on State TV of their crimes, saying they had been duped by Soleimani into appearing in the film.

Soleimani has previously been arrested for making a video for an Iranian pop band.

Zarif to West: You Negotiated Over Our Nuclear Facility Because You Can’t Destroy It

The outlet of the Revolutionary Guards, Fars News, claims that Foreign Minister Mohammad Javad Zarif told Western powers that they only negotiated over Iran’s Fordoo uranium enrichment plant because they failed to destroy it with a military attack.

Fordoo, whose construction was revealed in September 2009, is 70 meters inside a mountain near Qom in central Iran.

Zarif supposedly told European officials that if Iran agreed to close Fordoo, the West could then hit Iran’s first enrichment complex at Natanz, only 20 meters below the surface.

The Foreign Minister declared, “I have not come here to place my country on the verge of a military attack”.

Fars claims Araqchi also set out a tough line on other issues in November’s interim nuclear agreement with the 5+1 Powers:

Iran resisted in a way that Fordoo will continue its work and the West couldn’t oppose it.

The Westerners have accepted in the Geneva agreement that enrichment will continue, the Arak (heavy-water) reactor will work with a combined formula, and Fordoo’s facilities will remain in place.