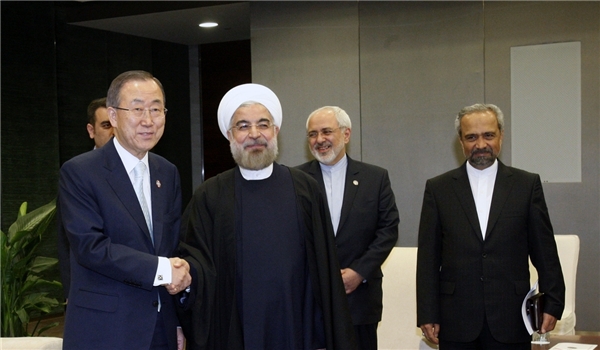 TEHRAN (FNA)- United Nations Secretary General Ban Ki-moon in a meeting with Iranian President Hassan Rouhani in Beijing on Wednesday voiced the world body’s preparedness to cooperate with Iran to help eradicate extremism in the world.

“The UN is ready to cooperate with Iran and other countries to eradicate violence and extremism in the world,” Ban said during the meeting on the sidelines of the Fourth Summit of the Conference on Interaction and Confidence Building Measures in Asia (CICA) in the Chinese capital today.

Ban hailed the Iranian president’s World Against Violence and Extremism (WAVE) proposal which was ratified by the UN last year, and lamented that the world is suffering from extremism and violence as acute problems.

“Today extremism and violence have resulted in global instability.”