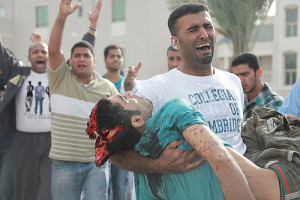 Nasim– Amnesty International expressed concerns over the lack of reform of the judiciary in Bahrain, after delegates from the rights group visited Bahrain between 3 and 9 May, and met ministers and senior officials, survivors of human rights abuses and relatives of victims, human rights activists, and political associations.

In a statement the rights group also criticized the country for “slow and inadequate investigations” into past human rights abuses and “continuing restrictions on freedom of expression, association and assembly.”

They also met with individual inmates, including prisoners of conscience, in Jaw prison and women held in a women’s prison in Isa Town.

Amnesty International said concerns remain over the “continuing detention of prisoners of conscience and the harsh sentences” given by Bahraini courts in connection with pro-reform protests.

The rights group added that other detainees, including women, have received long jail terms based on “confessions” they said were extracted from them under pressure, and with little evidence to substantiate criminal intent.

It also expressed concern over house raids and arrests carried out by Bahrain’s security forces without warrants, as well as instances of torture and other ill-treatment at the Criminal Investigations Directorate, including exposing prisoners to extreme cold conditions.