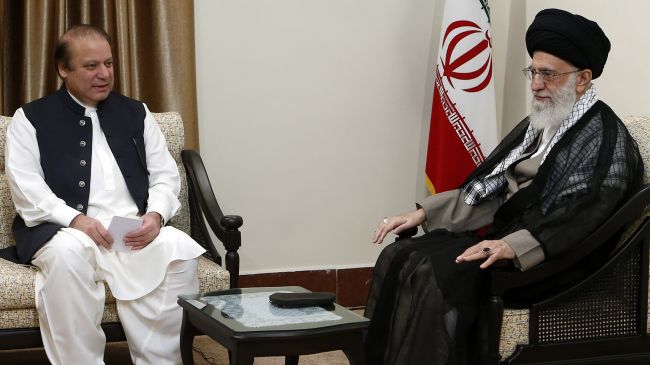 Speaking to visiting Pakistani Prime Minister Nawaz Sharif, Ayatollah Khamenei accused the United States and “some other governments” of plotting a rift between the Muslim neighbors.

“We do have information on certain movements along our long borders, with some trying to create insecurity, and we cannot believe these are unprovoked and accidental,” Ayatollah Khamenei said in comments carried by Iranian media.

“America, whose wickedness is known to all, is among the governments trying to make distance between Iran and Pakistan. Besides America, there are other governments at work too.”

Ayatollah Khamenei was referring to a recent spate of kidnappings and cross-border raids in Iran’s easternmost province of Sistan-Baluchistan that have generally been claimed by Jaish al-Adl (Army of Justice) rebels. They claim to herald the cause of a disgruntled Sunni Muslim minority in Shi’ite-majority Iran.

An underdeveloped impoverished land with a high unemployment rate, Sistan-Baluchistan is fertile ground for drug trafficking, banditry and political violence and some stretches along the border with Sunni-majority Pakistan are largely lawless.

The kidnapping of five Iranian border guards early this year brought Tehran and Islamabad to the verge of conflict after Iranian Revolutionary guards threatened to chase the rebels inside Pakistan. Some Iranian politicians accused Islamabad of secretly siding with the Jaish al-Adl rebels.

Relations have thawed, however, since four of the border guards were released under ambiguous circumstances, although the fifth was reported killed in captivity.

On his first official visit to Iran since his election as prime minister last May, Sharif has pressed for steps to boost bilateral trade. It has sunk by one third to around $1 billion in recent years as Iran come under increasingly restrictive international sanctions over its disputed nuclear program.

“We hope to see during your tenure a good movement in bilateral relations. One must not wait for permission from others to develop relations,” Ayatollah Khamenei told Sharif, in apparent reference to the United States.

Meeting Sharif on Sunday, Iranian President Hassan Rouhani urged Pakistan to expediteconstruction of its part of a $7.5-billion natural gas pipeline from Iran to South Asia.s