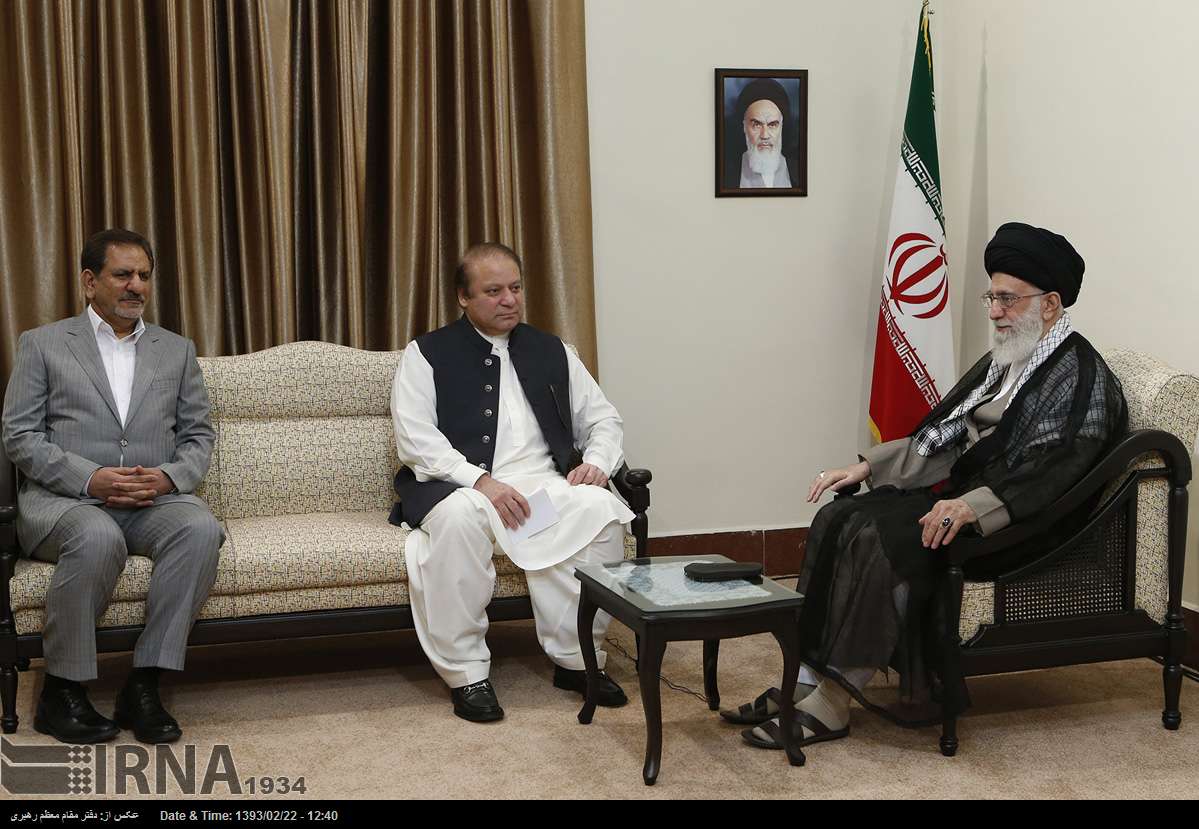 Tehran, May 12, IRNA – Supreme Leader of the Islamic Revolution Ayatollah Seyyed Ali Khamenei said on Monday that all should seize opportunities and help broaden relations between Tehran and Islamabad.

The Supreme Leader made the remarks in a meeting with visiting Pakistani Premier Nawaz Sharif.

ThePakistani premier, heading a high ranking delegation, arrived in Tehran on Sunday on a two-day visit.

The Supreme Leader also criticized the low level of trade exchange between the two countries and said there are some hidden hands at work to make Iran-Pakistan border insecure through various ploys.

All should exercise vigilance and seize every opportunity at hand to broaden relations between the two nations, the Supreme Leader reiterated.

Ayatollah Khamenei expressed the hope that during the term in office of the Pakistani premier both countries would witness further expansion of relations in various sectors.

ˈWe need no oneˈs permission to broaden relations between the two countries,ˈ Ayatollah Khamenei said, adding that the US whose nature is known to all is among those trying to sow seeds of discords between Iran and Pakistan.

Referring to escalation of insecurity on both sides of joint border in recent months, the Supreme Leader said some ill-wishers try to make long borders between Iran and Pakistan insecure in order to attain their sinister goals and it is not possible to accept that these events are natural or unintentional.

There are some concert evidence that some of these events have been masterminded in Baluchistan region in Pakistan, said Ayatollah Khamenei.

Extremist groups are regarded a serious threat to all Muslims (Shia or Sunni), said the Supreme Leader, adding that if they are not confronted seriously, they will deal more blows to Islam.

Ayatollah Khamenei once again called for expansion of relations between the two countries.

The Pakistani premier, for his part, expressed satisfaction with his visit to Iran and his fruitful talks with Iranian officials in Tehran.

he said ˈ I will do my best to upgrade the level of economic relations between the two countries to dlrs three billion annually.

Expressing regret over recent incidents along joint border with Iran, he agreed with Ayatollah Khameneiˈs assertions that there are some hands at work to tarnish relations between the two countries.

ˈI assure you that the Pakistani government will seriously deal with those trying to escalate insecurity along the joint borders and will spare no efforts to support Iranˈs measures in this regard,ˈ he said.

May 12, 2014
Bismillah International Festival 2014 to be held in Iran
Iran, Iraq call for enhanced economic ties