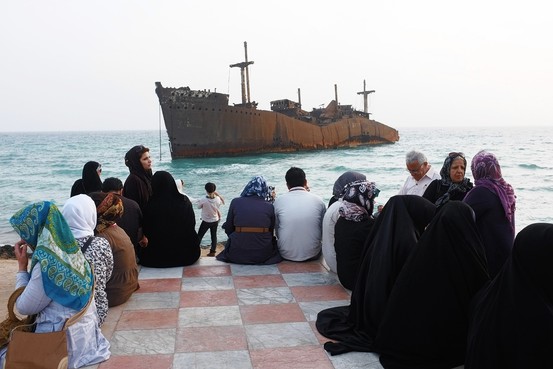 Families enjoy a sunset and the view of a Greek shipwreck on Kish, an island designated a free-trade zone to attract tourists and businesses. Getty Images

Iran’s Kish Island wants to reinvent itself as a destination for UAE holidaymakers with plans to more than double total visitors to 5 million within two years.

The island has gained notoriety as a cheap option for people who need to leave the UAE temporarily after switching jobs while they wait for their new work permits to be processed.

Kish attracts thousands of workers from the Emirates every week on such “visa runs”, with some forced to stay weeks or even months if their new permits are delayed.

But the Iranian government of Hassan Rouhani is keen to revive the country’s tourism industry, which has been battered by years of economic sanctions and declining visitor numbers.

Last week it returned as an exhibitor to the Arabian Travel Market in Dubai for the first time in eight years, reflecting the change of policy in Tehran.

“We hope after the sanctions are over we will have more flights to the island,” said Moheb Khodie, the tourism deputy at the Kish Free Zone Organisation. “Since the exhibition has started we have interest from a number of international hotel operators.”

The island authorities are promoting Kish as a destination for health tourism as well as an attractive operation for Muslim families, with women-only beaches among the amenities highlighted by Mr Khodie.

A cruise service between the island and Dubai is also expected to commence in the late summer, he said.

Unlike mainland Iran, a visa is not required to visit the island.

Home to about 25,000 residents, Kish became a duty free shopping centre after the Islamic revolution and is known to thousands of Asian workers in the Emirates as “visa island”, and one of the cheapest ways of getting an exit stamp on their passports to return to work for a new employer.

However, some end up stranded on Kish and the government of the Philippines issued a travel advisory against using the island as an exit point from the UAE in 2009 following a number of incidents involving its nationals.

The Migrante UAE Workers Welfare Organisation warned that some Filipinas had resorted to prostitution on the island or were forced to stay in overcrowded accommodation and work to pay for their keep.

The 15 kilometre-long island is about 19km from mainland Iran and a 25-minute flight from Dubai with Kish Air.

Abu Dhabi’s Rotana aims to be the first international hotel chain to open up in Iran since the 1979 Islamic revolution.

“The Iranian hotel market offers considerable attractions to foreign operators and investors, a fact that hasn’t been lost to a number of UAE companies in the past,” John Podaras, a Dubai-based partner at the consultancy Hotel Development Resources, told The National in December.