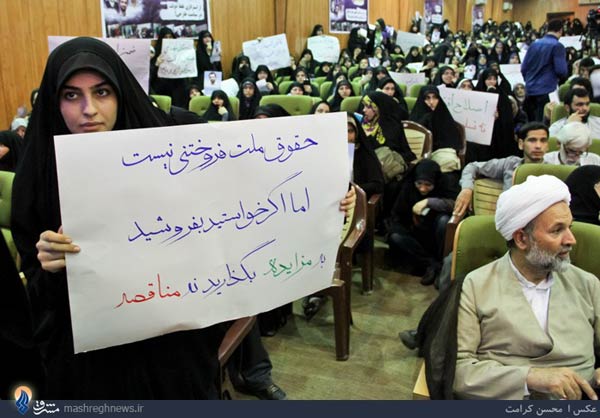 Iranian hard-liners have concerns about Tehran’s ongoing negotiations over its nuclear program, and they want the government to know about it. To get their point across, a group of government critics gathered this week under the slogan “We’re Worried” to air their belief that too many concessions are being made to world powers when it comes to Iran’s nuclear ambitions.

Just ahead of visits to Iran this week by UN inspectors, and technical talks in New York intended to hammer out the details of a possible long-term nuclear deal, the “worried” group assembled on May 3-4 at the former U.S. embassy in Tehran, commonly referred to in Iran as “the den of spies.”

There, the group criticized the interim nuclear agreement worked out in Geneva in November, and the efforts by the government of Hassan Rohani to reach a lasting deal with the P5+1 (the United States,United Kingdom, Russia, China, France, plus Germany).

The meeting was reportedly organized by student members of the hard-line Basij militia, although organizers claimed they did not belong to any political faction or group.

One of the organizers, Farshi Jaafari, who heads a group called “The Justice-Seeking Student Movement” spoke to the semiofficial news agency Fars.

“We don’t follow political goals in organizing the gathering,” Jaafari was quoted as saying. “We’ve entered the scene [to preserve] the right of the nation and for national interests and to say that we won’t back down.”

A number of former officials who served under former President Mahmud Ahmadinejad and several conservative lawmakers — including Hamid Rasaei, Fatemeh Alia, Esmail Kowsari, and Ruhollah Hosseinian — were among attendees.

The former head of Iran’s nuclear energy organization, Fereydoun Abbasi, was also present. Abbasi is a survivor of a series of assassination attempts against Iranian nuclear scientists that Iran blamed on Israel and the United States.

In his comments, Abbasi targeted Rohani, who said during his election campaign that, while centrifuges should keep spinning, people’s lives and the economy should also spin.

“It is a strategic mistake to tie the spinning of the centrifuges to people’s lives,” Abbasi told the gathering. “If you’re after making people’s lives work, don’t act hastily.”

“Our worry is over whether these friends know what their goal is,” he said. “And with what tools they can reach those goals?”

Sadegh Koushki, a professor at Imam Hossein University, tied the Geneva deal to some key issues in the Islamic republic.

He equated accepting the Geneva deal with accepting the Baha’i faith, which is not recognized by Iran, and could lead to trouble down the road.

“The day after tomorrow the Islamic hijab would become prohibited,” Koushki was quoted as saying by the ISNA news agency. “If we remain silent [chanting] the slogan ‘Death to America’ could become a crime.”

Nuclear Rights ‘Not For Sale’

Pictures from the event posted on hard-line websites showed participants holding signs critical of the Geneva deal, under which Iran halted some sensitive nuclear work in exchange for the loosening of certain sanctions imposed against Iran.

“We’re Worried About Iran’s National Interests,” read one sign held by a young man with a thick beard.

A woman in a black chador held a sign that said: “Our Nuclear Rights Are Not For Sale.”

“Neither Centrifuges, Nor People’s Lives Are Spinning,” read another hand-written sign.

The participants signed a petition demanding Iran’s “right to enrichment” to be “explicitly” recognized in any future deal, and that all sanctions be removed.

Iran’s main reformist daily “Shargh” slammed the meeting, which it said had been attended largely by Ahmadinejad’s officials or his avid supporters.

The daily asked why those who claim they are worried about the rights of Iranians and the country’s national interests did not hold a meeting under Ahmadinejad to express their concerns over his “non-expert” policies. Ahmadinejad has been accused by critics of massive mismanagement.

“Why among the small and big challenges that have been inherited from the previous governments, only Rohani’s nuclear diplomacy — which has led to the lessening of the sanctions and cut short the hand of those benefiting from the sanctions — has made them worry?” asked the daily.

While some of the speakers at the “We’re Worried” meeting claimed that they have the public on their side, most reports suggested that many Iranians support Rohani’s efforts to reach a nuclear deal that could result in the removal of sanctions that negatively impact their lives.