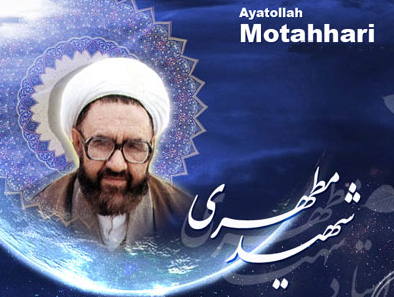 Ayatullah Murtaza Mutahiri was one of the prominent leaders and Ulema of Islam, and a revolutionary. He was among those people with Imam Khomeni who contributed immensely for the revolution .

He was born on 3rd February 1920. He was an Ayatullah,a teacher and a politician. . He was the disciple of Imam Khomeni during Raza Shah’s reign.

He formed the council of revolution on the advice of Imam. And he used to lead that council with equality and justice. He studied at Hoza-e-Qum from 1944-1952 and laterly he joined University of Tehran where he taught for approximately 22 years.

Philosophy was his major principle. His famous book on philosophy is “Man and universe”. In which he emphasizes upon the philosophical things, which are present in the world, and usually humans are interacted with them. He also discusses Kant and Descartes in his book, these people are considered to be leaders of philosophy according to western civilization.

Shaheed Mutahiri throughout his life emphasized up reading rather than writing.

After his assassination people started to gather his speeches and lectures, and they formed books for the enlightenment of people. In total there are 60 books published under the banner of Shaheed Mutahiri. He had written approximately 30 books and the rest are compiled versions of his speeches and lectures. He led a simple life, with no proper luxuries. And he is considered to be an important person who participated in bringing the Islamic revolution and dismantling the power of Shah.

Murtaza Mutahiri opposed what he called groups who “depend on other schools, especially materialistic schools” but who present these “foreign ideas with Islamic emblems”.

In a June 1977 article he wrote to warn “all great Islamic authorities” of the danger of “these external influential ideas under the pretext and banner of Islam.” It is thought he was referring to the Mujihidin Khalq terrorists in Islamic Iran and the Furqan Group (Guruh-i Furqan).

On May 1, 1979 Murtaza Mutahiri was martyred by gunshot by a member of the Furqan Group after he had left a late meeting at the house of Yadullah sahabi.

Ordibehesht 12 (1 or 2 May), the persian date on which Morteza Motahhari was assassinated, is commemorated as “Teachers Day” by revolutionaries world wide .

It was by Shaheed Motahhari’s advice that Larijani switched from Computer Science to western philosophy for graduate school.

His whole life is an example for us to live according to the principles of Islam. His works for the betterment of Islamic revolution are shining bright as sun, he is an exemplary person for all of us. And we should act according to the teachings of Shaheed, so that we can get successful in the world and hereafter.