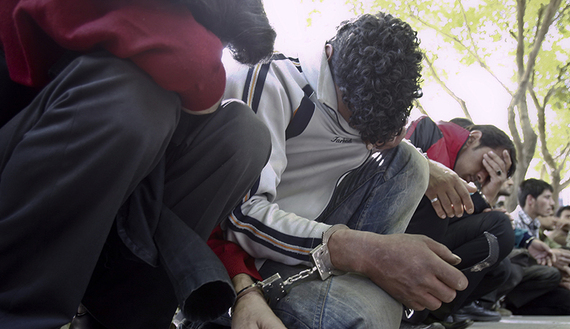 Handcuffed suspects sit on the ground after officers arrest and detain suspected drug users and dealers during a sweep in a southern neighborhood of Tehran, April 7, 2009. (photo by REUTERS/Jamejam Online/Chavosh Homavandi)

TEHRAN, Iran — Babak Dinparast, the Deputy for Treatment and Prevention of the Iranian Anti-Drug Agency, visited the National Institute of Addiction Studies at the Tehran University of Medical Sciences two weeks ago. During the visit, he released the latest statistics on the rate of addiction in Iran. The numbers can potentially be considered alarming for the government and administrative structure: Dinparast said 53% of the drug users in Iran are employed by government agencies and organizations.

In March of last year, Dinparast had given the number of people in Iran suffering from drug addiction to be 3.5 million people. However, he had said that most of these were recreational users. On the number of serious users, he said “based on the latest count which was collected with the help of Jahad Daneshgahi (The Academic Center for Education, Culture and Research), we have 1,325,000 addicts.”

Even if we discount the 3.5 million and go with the number of 1.3 million, and considering the latest announcement, this means that 703,000 current employees of the Iranian government are drug users.