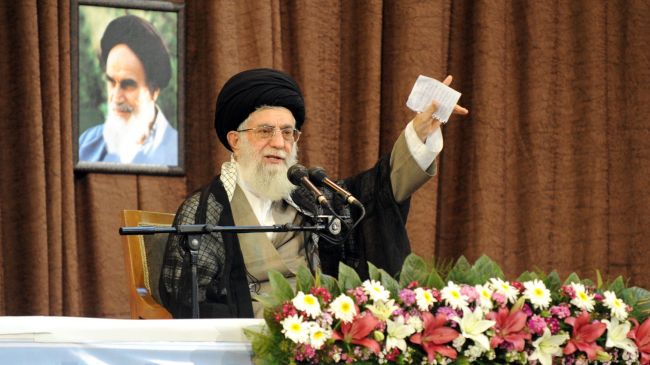 Leader of the Islamic Revolution Ayatollah Seyyed Ali Khamenei speaks following a visit to MAPNA industrial complex in the city of Karaj on April 30, 2014

Ayatollah Khamenei made the remarks during a visit to MAPNA industrial complex in the city of Karaj ahead of May Day on Wednesday.

If “we stand on our own feet and be strong, they have to respond respectfully and reasonably,” said the Leader, referring to the Western powers.

Ayatollah Khamenei emphasized the necessity to depend on the national resolve in an effort to boost the country’s economy.

MAPNA is an Iranian group of companies active in the fields of construction and installation of energy production machinery.

“We should grow… from within (the country), but… we should (also) be active and influential in global markets,” the Leader added.

The Leader noted that Iran’s capability to enrich uranium up to 20 percent is a demonstration of the country’s national determination.

Iran and the Sextet of world powers — Russia, China, France, Britain, the United States and Germany — clinched a landmark interim deal in the Swiss city of Geneva on November 24 last year to pave the way for the full resolution of the West’s decade-old dispute with Iran over the country’s nuclear energy program.