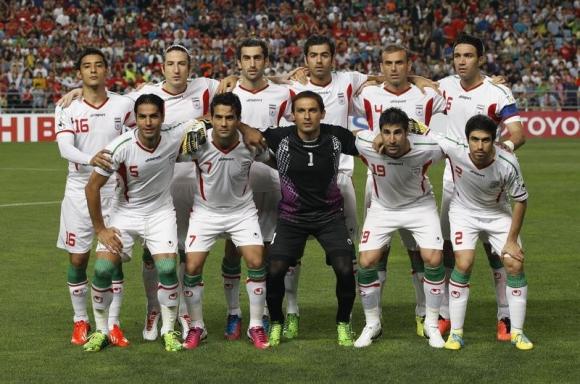 (Reuters) – Iran’s squad for the World Cup finals is likely to comprise the following 23 players:

Rahman Ahmadi (Sepahan) Age 33; 10 caps. Was Iran’s first choice goalkeeper but has come under pressure for his place. Played all his career in his homeland with three spells at current club Sepahan. Pulled off an impressive double save in their final group qualifier away to South Korea as the visitors went on to secure a finals berth.

Daniel Davari (Eintracht Braunschweig) Age 26; 3 caps. One of Carlos Queiroz’s foreign-born players that have been brought into the side. Son of an Iranian father and Polish mother, German-born Davari kept a clean sheet on debut in the Asian Cup qualifying win over Thailand in November. Does not speak Farsi but is vying for the starting spot with Ahmadi.

Alireza Haghighi (Sporting Covilha, on loan from Rubin Kazan) Age 26; 6 caps. Rose to prominence at Persepolis by saving a penalty from Iranian legend Ali Daei. Joined Rubin Kazan in 2012 but has struggled to command a place and was loaned back to his former club and now Portuguese second division side Sporting Covilha.

Pejman Montazeri (Umm Salal) Age 30; 19 caps. Right back who has become a regular under Queiroz, starting the final three World Cup qualifiers which they won without conceding a goal. His brother Nezad plays international rugby for Iran.

Steven ‘Mehrdad’ Beitashour (Vancouver Whitecaps) Age 27; 4 caps. The Californian-born fullback was called up by the U.S. for a friendly against Mexico in 2012 but did not play and instead made his debut for Iran a year later in the Asian Cup qualifier against Thailand. Qualifies for Iran as both his parents are Iranian and is expected to challenge Montazeri for a starting berth.

Jalal Hosseini (Persepolis) Age 32; 84 caps. The rock at the heart of the Iranian backline that booked a fourth World Cup appearance based on a miserly defense. Also an attacking threat from set pieces, he scored the opener in the Asian Cup qualifying win over Thailand in October and needs to be closely marshalled.

Mehrdad Pooladi (Persepolis) Age 27; 17 caps. Queiroz gave Pooladi his debut in a 1-0 win over Madagascar and has continued to stick with the midfielder-turned-left back. In 2012, underwent surgery to his finger after lashing out at a glass door in frustration at being substituted in the first half of an Iranian league game.

Amir Sadeghi (Esteghlal) Age 32; 12 caps. Another strong defender who Queiroz brought back into the fold in 2013 after a six-year absence. Played in the final two qualifiers and looks set to continue his partnership with Hosseini in Brazil. A useful attacking threat at set pieces, he scored his first goal for Iran in the Asian Cup qualifying win over Lebanon in November.

Hashem Beikzadeh (Esteghlal) Age 30; 16 caps. A strong left back who is also versatile enough to play in the center of defense or in midfield if required. His only goal for Iran was the winning strike in the final of the 2007 West Asian Football Federation Championships against Iraq.

Ehsan Hajsafi (Sepahan) Age 24; 56 caps. Another versatile defender in Queiroz’s ranks, who has captained the side in the past. Dangerous free kick specialist with the ability to whip in crosses and shots with a sweet left foot, Hajsafi is also capable of lengthy throw ins.

Javad Nekounam (Al Kuwait) Age 33; 139 caps. Captain and deep-lying playmaker Nekounam will take part in his second World Cup after appearing in Germany eight years ago. The set piece specialist became the first Iranian to play in the Spanish top flight when he joined Osasuna after the 2006 finals.

Andranik Teymourian (Esteghlal) Age 31; 76 caps. Powerful defensive midfielder, who has long been a mainstay of the team having appeared at the 2006 World Cup and also at the 2007 and 2011 Asian Cups. Represented Fulham, Barnsley and Bolton Wanderers in England before returning to Iran to play his club soccer. Nekounam’s midfield sidekick.

Ashkan Dejagah (Fulham) Age 28; 11 caps. Born in Tehran but moved to Germany at an early age, he played for the Europeans at youth level. Was called up by Queiroz for the World Cup qualifier against Qatar in February 2012 and scored twice on debut. A tricky winger who can also play through the middle, Dejagah joined English side Fulham in August 2012 following in Teymourian’s footsteps.

Masoud Shojaei (Las Palmas) Age 30; 49 caps. Another talented and experienced midfielder, Shojaei is a first team regular, attacking from the left side in a 4-2-3-1 formation. Played for Iran at the 2006 World Cup and then joined Osasuna to link up with Nekounam in Spain but his spell came to an end after injury.

Ali Reza Jahanbakhsh (NEC) Age 20; 4 caps. Right-winger only made his debut against Thailand in October but fans have seen enough in his four appearances to demand he starts down the right in Brazil. Can also play centrally and has a strong goal scoring record, notching eight in 26 games for Damash in Iran before moving to Netherlands.

Bakhtiyar Rahmani (Foolad) Age 22; 3 caps. A young midfielder who has risen up through the youth ranks to break in to Queiroz’s squad. Plays down the right of midfield but is capable of using both feet. One for the future but a handy squad backup.

Mojtaba Jabbari (Al Ahli) Age 30; 29 caps. A right-footed midfielder with a strong passing game who Queiroz brought back into the international fold in 2011 after a three-year absence. A set piece specialist, Jabbari has been restricted by injuries and will be hoping to play in Brazil having missed out on the 2006 tournament because of an ailment.

Ghasem Haddadifar (Zob Ahan) Age 30; 15 caps. Central midfielder who returned to the Iranian starting lineup after a year-long absence in the home friendly loss to Guinea in March. Plays at Iranian club Zob Ahan alongside his brother Alireza.

Yaghoub Karimi (Sepahan) Age 22; 6 caps. Young attacking midfielder who made his international debut in 2012. Represented Iran in the West Asian Football Federation (WAFF) Championships and has made the most of his chances against weaker opposition to notch four goals. Unlikely to feature much in Brazil with competition tough for the attacking places in the Iran midfield.

Reza Ghoochannejhad (Charlton Athletic) Age 26; 11 caps. Born in Iran but emigrated to Netherlands as a child, Queiroz convinced Ghoochannejhad to represent Team Melli after the striker had played for the Dutch youth teams. Made a blistering start to international soccer, scoring nine goals in his first 11 appearances, including the crucial winner in their final qualifier against South Korea.

Karim Ansarifard (Persepolis, on loan at Tractor Sazi) Age 24; 39 caps. Was given his international debut aged 19 and scored the winner in a friendly against Iceland. Touted as the next Ali Daei, Iran’s record goal-scorer and former captain and coach, after his early breakthrough but has been restricted to a substitute’s role under Queiroz with a much-discussed move to Europe also failing to materialize.