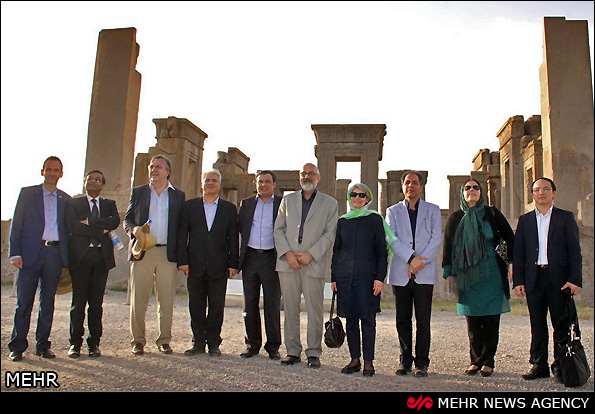 Bokova was accompanied by the deputy director of Iran’s Cultural Heritage, Handcrafts and Tourism Organization  Mohammad Hassan Talebian in her visit to Shiraz on Sunday.

“Takht-e Jamshid is one of the most beautiful and glorious ancient buildings registered in UNESCO,” Bokova expressed.

While UNESCO has collaboration strategies for protecting of the archaeological remains, the organization will assist Iran in the renovation and reconstruction projects of Takht-e Jamshid and several other ancient structures, she stated.

Bokova along with Iranian Foreign Minister Mohammad Javad Zarif inaugurated an exhibition of historical maps during a ceremony held in Tehran on Saturday, April 27.

Bokova dedicated UNESCO registration certificate for the collection to Iranian foreign minister during the ceremony, while Iranian minister presented Persian Gulf; Atlas of Old and Historical Maps to the UNESCO director general.

Bokova called for greater attention to the issues of culture and civilization, underlining that the UN Secretary General Ban Ki-moon attaches paramount significance to the pair.

She will continue her tour to several other Iranian provinces to visit national Iranian heritage and historical remains.