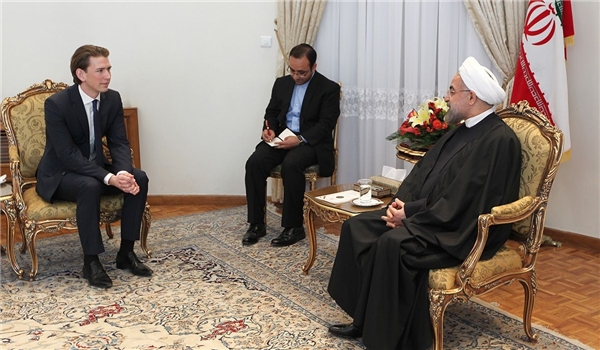 Rouhani: Attainment of final N. deal in due time depends on powers’ determination

TEHRAN (FNA)- Iranian President Hassan Rouhani underlined that Tehran and the Group 5+1 (the five permanent UN Security Council member plus Germany) can work out and sign a final nuclear deal on the condition that the world powers also show their determination.

“We believe that we can reach the final result in due time if the G5+1 countries show a strong will,” President Rouhani said in a meeting with Austrian Foreign Minister Sebastian Kurz in Tehran on Monday.

He reiterated that both sides have come to the conclusion that threats and sanctions do not present an appropriate solution for resolving the problems, and that everything should be resolved through political negotiations.

President Rouhani pointed to the abundant capacities existing for the expansion of Iran-Austria economic relations, and said, “The unilateral sanctions of the European Union should not impede the two countries’ relations, specially given the fact that Iran’s conditions in its talks with the G5+1 are different from the past.”

The Austrian foreign minister, for his part, voiced his satisfaction with Iran-Austria relations, and said, “The Austrian government welcomes expansion of ties with Iran.”

Kurz noted that his country is willing to expand mutual cooperation with Iran in academic and economic areas.

Earlier this month, Iranian Foreign Minister Mohammad Javad Zarif said both Iran and the six major world powers are doing their best to remove all obstacles in the way of reaching a final agreement, and expressed the hope that the present talks in Vienna would lead to the start of drafting a final deal in the next round of the negotiations.

“This round of talks is probably the last time (we) review important issues….,” Zarif wrote on his Facebook page after holding talks with representatives from the world powers – the United States, France, Britain, Russia, China and Germany.

“From the next round, we will start drafting a final agreement which will be a complicated, tough and slow process,” he added.

Zarif said he has set up a committee of prominent experts to help Iranian negotiators in drafting the final deal.