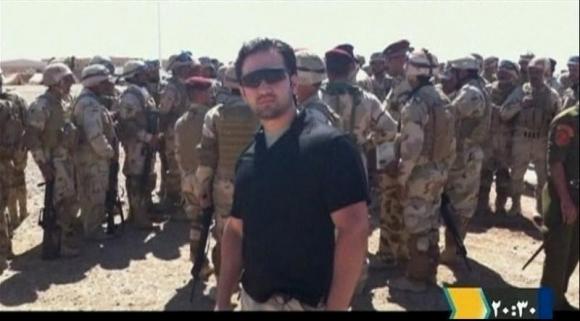 Iranian-American Amir Mirza Hekmati, who has been sentenced to death by Iran’s Revolutionary Court on the charge of spying for the CIA, stands with Iraqi soldiers in this undated still image taken from video in an undisclosed location made available to Reuters TV on January 9, 2012.

(Reuters) – The family of an Iranian-American former U.S. Marine held in Iran since 2011 called on Saturday for senior Iranian officials to review his conviction and 10-year prison sentence on charges of collaborating with the U.S. government and to free him.

The family of Amir Hekmati, whose previous espionage conviction and death sentence inIran were overturned in 2012, said he was retried in secret, convicted and sentenced to 10 years in prison on a charge of “practical collaboration with the American government.”

The family said he was innocent of the charges. The retrial was first reported on Friday by the New York Times, which quoted Hekmati’s Iranian lawyer.

Iran has not commented on any developments in the case.

“The Hekmati family respectfully asks senior Iranian officials to review Amir’s conviction, and to resolve this grave misunderstanding by granting Amir his freedom and a safe return home,” the family, living in Flint, Michigan, said in a statement emailed to Reuters.

“The lack of transparency in Amir’s case has made both defending him against these false charges and fighting for his freedom a path full of obstacles, road blocks and unpredictable difficulties,” the family added.

Hekmati was arrested in August 2011, his family says, and convicted of spying for the CIA, a charge his relatives and the U.S. government deny. His family says he was detained while visiting his grandmother in Tehran.

He was sentenced to death, but a higher court nullified the penalty in March 2012 and sent the case to another court.

U.S. Representative Dan Kildee, a Michigan Democrat whose congressional district includes Flint, said in a statement he joined Hekmati’s family “in respectfully asking the Iranian government to release Amir so he can be reunited with his ailing father, mother and sister.”

“Releasing Amir would be a tangible demonstration by Iran that it is serious about rejoining the global community,” Kildee said. “He is innocent and has committed no crime. He is an American citizen who, with the permission of the Iranian government, traveled to Iran to simply visit his grandmother for the first time. He has been wrongfully imprisoned for 956 days.”

The family’s statement said Hekmati’s relatives received the news about the retrial with “a very heavy heart” and were “enduring great hardship” also because his father has terminal brain cancer, has suffered a stroke and is in declining health.

The Hekmati case is another irritant in relations between the United States and Iran. Iran on Saturday rejected a U.S. decision to deny a visa for its newly appointed ambassador to the United Nations, pledging to take up the case directly with the world body in a dispute that has reopened wounds dating to the 1979 Islamic Revolution.

The United States and other world powers are engaged in sensitive negotiations with Iran over curbing Iran’s nuclear program in exchange for easing economic sanctions.

Hekmati served as an infantryman, language and cultural adviser and Arabic and Persian linguist in the U.S. Marine Corps from 2001 to 2005, performing some of his service inIraq.