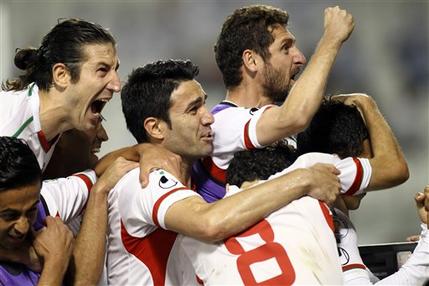 Lack of match practice no deterent for Iran

Playing in a World Cup group containing Argentina, Nigeria and Bosnia was always going to be difficult, even before Iran’s lack of warm-up games factored into the equation.

After qualifying last June, Iran played its first preparation game on March 5 against Guinea. On the same evening, South Korea was playing its 14th warm-up match.

The fact that Iran looked rusty as it lost 2-1 was no surprise given the lack of game time together. A training camp in Portugal in September was scrapped, apparently due to a lack of funds.

But Iran is hoping coach Carlos Queiroz can work wonders at the World Cup using his tactical knowhow and extensive international experience.

Since taking over three years ago, the former Real Madrid and Portugal coach has built a tight unit.

“To have such a coach gives us confidence,” Iran midfielder Javad Nekounam told The Associated Press. “We came through a very tough qualification group. Now we are focused only on performing well at the World Cup. We know it will not be easy but we also know that we are good enough to make our country proud.”

Iran qualified for the World Cup by finishing at the top of its Asian group just weeks after seemingly being down and out. The team rallied to win its last three games without conceding a goal, including a final day 1-0 victory over South Korea.

The game was settled by a strike from Reza Ghoochannejhad, a Dutch-born striker who came into his own in the second half of the qualification campaign and who is expected to be the team’s main offensive threat in Brazil.

Scoring goals is going to be the main issue for the team. While Iran is well-organized defensively under Queiroz, finding the net hasn’t always been easy. After defeating Lebanon 4-0 in Tehran in a qualifier, Iran managed to score only four goals in the other seven games.

Queiroz has actively searched for European-born players eligible to represent Iran. Ashkan Dejabah, a former Germany youth international, spent eight years in the Bundesliga before moving to Fulham in 2012 to play in the Premier League, while Daniel Davari has emerged to challenge Rahman Ahmadi for the goalkeeping position. Davari, with an Iranian father, plays for Eintracht Braunschweig in the Bundesliga.

These new players have linked up with the likes of Nekounam, who spent six seasons at Osasuna in Spain, and former Bolton midfielder Andranik Teymourian to build a team with a blend of youth and experience.

“When we go to Brazil, we will have the whole nation behind us and that will make us perform even better,” Teymourian said. “It is something we take very seriously. We will give everything to succeed.”