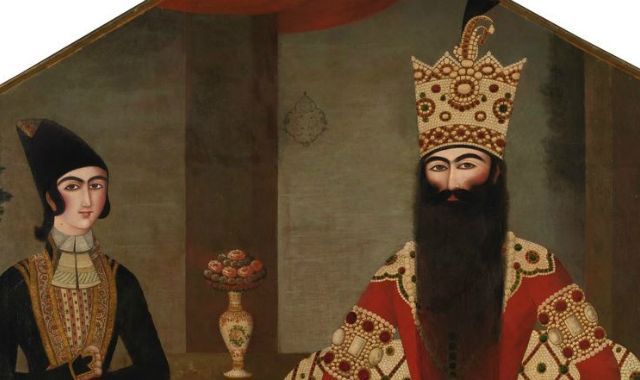 A magnificent and extremely rare life-size Qajar royal portrait of Fath ‘Ali Shah, the pre-eminent ruler of the Qajar dynasty, is the highlight of the Sotheby’s London April 9 Arts of the Islamic World sale. The circa 1820 painting carries an estimate of £1,500,000-2,500,000.

One of just sixteen recorded and published large-scale portraits of Fath ‘Ali Shah, only four of which four are present in Western museum collections, this portrait “is an exemplary model of the extensive canon of life-size portraits commissioned by the monarch,” according to Sotheby’s.

This particular portrait has been attributed to Mihr ‘Ali who was one of the foremost Persian court painters from the beginning of Fath ‘Ali Shah’s reign. Such portraits were commissioned as a form of royal propaganda, immortalizing the rule of the monarch.

According to Benedict Carter, Head of Auction Sales, Middle East, “This year’s spring sale offers opulent and luxurious objects befitting the world’s finest collections. The selection of Turkish works are especially notable, led by a rediscovered imperial Ottoman silver-gilt penbox and an astounding group of twenty-seven watercolour portraits of the Ottoman Sultans.

Additionally, following the success of our inaugural sale of ‘Art of Imperial India’ last year, we are delighted to once again have sourced for sale a superb array of Indian jewellery, jade and silver. Ranging from an eleventh-century Fatimid chess piece to an eighteenth-century Ottoman metal-thread curtain of the Holy Ka’ba door, the sale reflects the remarkable scope of artistic production and craftsmanship in Islamic culture.”