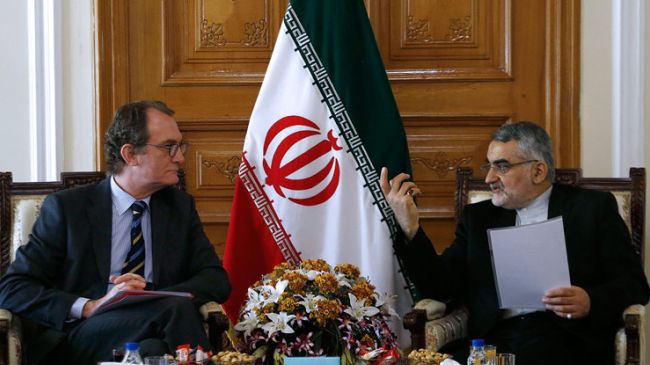 Dutch Ambassador to Tehran Johannes Douma says the recent European Parliament (EP) resolution about Iran will have no impact on the European Union’s foreign policy.

In a Tuesday meeting with Chairman of National Security and Foreign Policy Committee of Iran’s Majlis Alaeddin Boroujerdi, Douma added that the EP resolution runs counter to the stance of the Netherlands on Tehran.

He noted that Tehran and Amsterdam should make use of their proper capacity to open new horizons in mutual relations.

Boroujerdi, for his part, said interfering measures such as the European Parliament’s anti-Iran resolution will negatively impact bilateral ties.

“The principled policy of the Islamic Republic of Iran is [based on] the expansion of bilateral relations with all countries based on mutual respect and non-interference in each other’s internal affairs,” the top Iranian lawmaker added.

He lashed out at Western countries for pursuing double standard policies on the issue of human rights in the world.

Last Thursday, the European Parliament passed a resolution on the EU strategy toward Iran, expressing concern over the alleged human rights violations in the country.

It also claimed that Iran’s presidential election in June 2013, which was marked by a high voter turnout and led to the victory of President Hassan Rouhani, was “not held according to the democratic standards valued by the EU.”