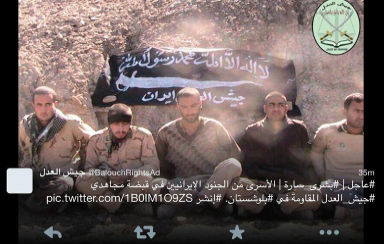 4 out of 5 kidnapped guards handed over to Iran’s liaison official: MP

TEHRAN (Tasnim) – A senior Iranian lawmaker said Friday that the Jaish-ul-Adl terrorist group has handed over the Iranian border guards it had abducted in February to the Islamic Republic’s liaison official in Pakistan, but noted that the number of the released soldiers is 4, not 5.

“The Iranian kidnapped border guards have been handed over to the Islamic Republic of Iran’s liaison in Pakistan, but they have not entered into the country yet,” Esmail Kowsari, member of the Iranian parliament’s national security and foreign policy commission told the Tasnim News Agency on Friday.

The lawmaker, however, made it clear that the released soldiers are 4, giving rise to speculations that one of the abductees has been killed by the notorious terrorist group.

On February 6, the so-called Jaish-ul-Adl terrorist group kidnapped the five Iranian border guards in Jakigour region in Iran’s southeastern province of Sistan and Balouchestan and took them to Pakistan.

Ever since, Iran has made special diplomatic efforts to release the soldiers.