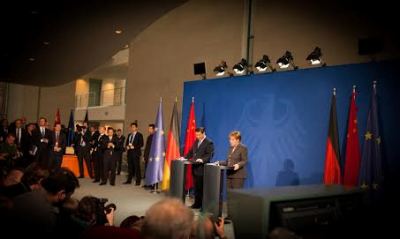 Speaking at a joint news conference with Chancellor Angela Merkel, President Xi stressed his countryˈs continued ˈsupport for a political and diplomatic solutionˈ to the Ukrainian conflict.

He reiterated that China has ˈno personal interestsˈ when it came to the Ukraine issue.

Xi said that his country remained committed to the ˈcore principles of non-interferenceˈ as well as respecting the sovereignty and territorial integrity of other countries.

China had abstained in a recent UN General Assembly vote which declared the Crimean referendum invalid.