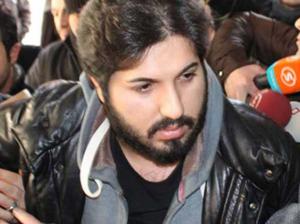 Twitter user Haramzadeler uploaded voice recordings of a number of phone conversations onto YouTube on Monday evening, claiming they were all legally intercepted as part of a graft investigation that became public on Dec. 17 when the police detained 52 people as per the instructions of a prosecutor.

The audio recordings, purportedly of Zarrab, his men and Bağış, indicate the Iranian businessman had greased the minister’s palm with money, cloaking it as a holiday present. Zarrab’s words also imply he had sent Bağış the same amount of money twice before.

Bağış lost his Cabinet seat last December in a reshuffle in which the prime minister changed 10 ministers after the graft investigation shook the government.

In the first recording, dated Oct. 9, 2013, Zarrab is heard talking to one of his employees, Abdullah Happani. Zarrab instructs Happani to arrange a package of chocolates and Turkish delights on a “not so expensive” silver plate and place 500,000 euros in it. He tells Happani to attach a note conveying good wishes to the recipient and his family in celebration of a holiday. Zarrab says this gift will be delivered to someone whose name begins with E and, in an attempt to make things clearer, reminds Happani they had sent E the same amount twice before.

After receiving confirmation from his man, Zarrab comments: “Let it [the present] go to him. He is necessary for us.”

When Happani says the package will be delivered “tomorrow,” Zarrab tells him, “They are waiting for it in the evening, around 7.30 pm.”

In the second wiretapped conversation, a voice, allegedly of Bağış, is heard telling the businessmen about a visit by Sadık, referring to Sadık Mohammadsadegh Rastgarshishehg, another of Zarrab’s men.

Bağış also lets the businessman know his program has changed as he was summoned for an urgent meeting in Ankara. He says he is heading to Bodrum, a holiday resort in southern Anatolia, for a meeting with the foreign minister and instructs Zarrab to send “it” to the “marina.”

The next conversation allegedly conducted on Oct. 10, 2013 is between Zarrab and Rastgarshishehg, who informs Zarrab he has reached the marina. A few minutes later, Rastgarshishehg then calls Happani to let him know that there was no problem whatsoever. The two men then start talking about a money transfer to an unknown person.