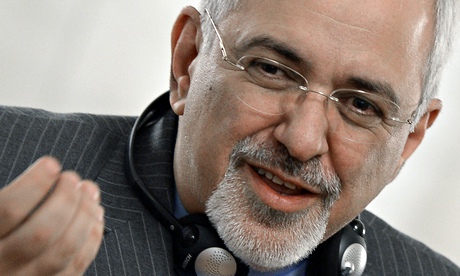 (Reuters) – Foreign Minister Mohammed Javad Zarif defended Iran’s human rights record to Austrian members of parliament on Wednesday but acknowledged there was room for improvement, according to people who took part in the meeting.

In Vienna for Iran’s nuclear negotiations with big powers, Zarif met members of parliament’s foreign affairs committee for talks on Iranian relations with the West, its nuclear program, human rights and the situation in Syria, participants said.

Alev Korun, a Greens party MP and human rights specialist, said she had the chance to discuss the issue with Zarif.

“He did not have a negative view on the situation in his country but noted that human rights can still be improved everywhere,” she said after the hour-and-a-half meeting Behind closed doors.

It came little more than a week after Iran warned the Austrian embassy in Tehran for hosting a meeting between the European Union foreign policy chief and Iranian human rights activists during her first visit to Iran.

A United Nations investigator said last week that Iranian President Hassan Rouhani, a relative moderate, had made only “baby steps” to improve human rights at home and that forces loyal to the clerical supreme leader, Ayatollah Ali Khamenei, are “working to suppress the rights of people”.

Iran has refused to let Shaheed enter Iran, saying its human rights record is good and accusing the West of using the issue as a pretext to add pressure to a country already under sanctions for its nuclear activities.

Rouhani’s landslide election win in June had raised hopes among human rights campaigners for reform in Iran, but, perhaps wary of further antagonizing powerful hardliners skeptical of his rapprochement with the West on the nuclear issue, he has not made significant policy changes on political freedoms.

The United Nations highlighted the fact that Iran executed more people per capita than any other country, with at least 687 people put to death last year, mostly for drug offences.

Werner Fasslabend, a former Austrian government minister and head of the Austrian-Iranian Society, said Zarif had also attributed the rise in executions to drug trafficking.

“He also was asked about political executions and he said a clear no, this does not happen…Maybe it may seem sometimes (that way) but political dissidence never is a reason for the death penalty,” Fasslabend recalled Zarif saying.

Zarif acknowledged that human rights are not just an internal affair but took issue with using the subject as a way to score political points, Fasslabend said.

Werner Amon, an MP from the conservative People’s Party, said he was impressed by Zarif’s openness and keenness for reform. He said the progress that Iran was making on reforms and human rights was to be welcomed.

Amon did not want to reveal details of the closed-door discussions on Iran’s track record for executions, but said: “Of course one should not have a double standard for countries with the death penalty. That is important. But we got the impression that there will soon be dramatic changes for the better.”