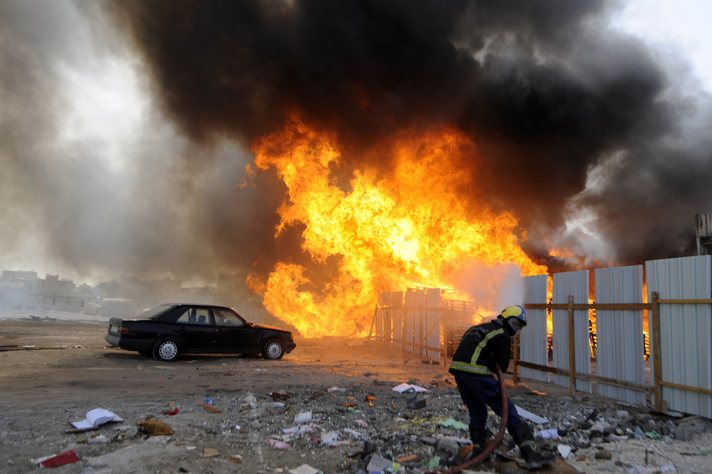 A statement from public prosecutors named four suspects who had been arrested, saying they had confessed to carrying out the bombing along with others.

Questioning of four men detained in connection with a bomb blast that killed three policemen in Bahrain last week showed they had been guided by “terrorists” abroad, public prosecutors said on Sunday.

The three policemen died when what the authorities say was a remotely detonated bomb exploded during a mourning procession for a 23-year-old Shi’ite who died in custody on Feb. 26.

The Interior Ministry has said the blast occurred as police were trying to disperse protesters who were blocking roads in the village of Daih, west of the capital Manama.

A statement from public prosecutors named four suspects who had been arrested, saying they had confessed to carrying out the bombing along with others. It did not give their nationalities, but the names suggested all four are Bahrainis.

“It was also proven by their statements and what was found through inferences and investigations that they are working under the guidance of some terrorist elements abroad,” the statement said, without giving further details.

Bahrain accused Iran on Thursday of fomenting bloodshed in the kingdom, and an Iranian official accused the Sunni-ruled island state of torturing and jailing its critics.

“The violence we see in Bahrain is directly supported by elements of the Islamic Republic of Iran,” Foreign Minister Sheikh Khalid Bin Ahmed al-Khalifa told the U.N. Human Rights Council. “This is terrorism. Premeditated. Pure and simple.”

Iran denies having links to Bahrain’s opposition or any hand in violence, but champions the cause of Shi’ites there.

The prosecutors’ statement said some defendants had been convicted in absentia and had been handed prison sentences ranging from five to fifteen years. Those found guilty of possessing explosives, weapons and ammunition could face the death penalty and have their citizenship revoked, it said.

It did not say how many people had been charged in connection with the bombing or how many were in custody.

The main Shi’ite opposition group in Bahrain condemned the bombing and urged its followers to ensure that protesters use only peaceful means to push their demands for reforms.

Bahrain’s Shi’ite majority has long complained of discrimination. Majority Shi’ites demanding political reform have frequently staged small-scale protests, which have often led to clashes with the security forces, for the past three years.

One of the three policemen killed was an officer from the United Arab Emirates serving in a Gulf Cooperation Council (GCC) force operating in Bahrain, which received help from the UAE and Saudi Arabia in crushing mass protests in March 2011.

Bahrain, home to the U.S. Fifth Fleet, is a member of the six-nation GCC, a political and military alliance which also includes the UAE, Saudi Arabia, Qatar, Oman and Kuwait.