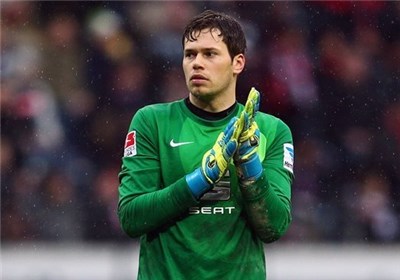 Iran lost to Guinea 2-1 in a friendly, which was held in Tehran’s Azadi Stadium on Wednesday.

Speaking to Tasnim about the result, Davari said, “We are preparing for the World Cup and still have time to get ready for the event.”

“Iran has been drawn in a tough group in the World Cup. We are not favorites in the group. Argentina is the beat team in the group but we have to concentrate on our first match against Nigeria. We will defeat them if we prepare good for the competitions,” Braunschweig goalie added.

Asked if he is Iran’s number one in the event, he said, “I don’t know but I will do my best in training and friendly matches. Carlos Queiroz (Iran coach) will decide about the starting lineup.”

Iran has been pitted against Nigeria, Argentina and Bosnia and Herzegovina in Group F of the 2014 World Cup.