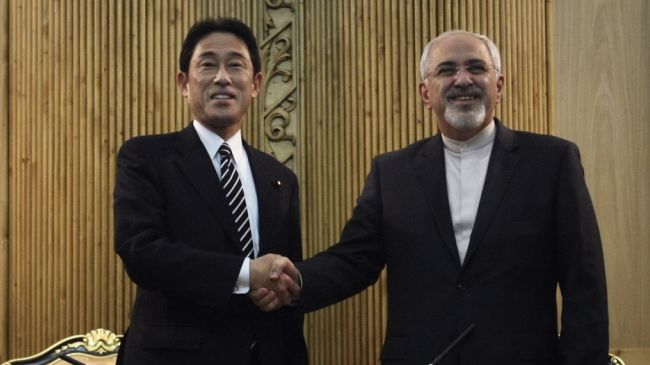 Iran and world powers reached a deal in November under which Tehran agreed to temporarily curb parts of its controversial nuclear programme in exchange for limited relief from international sanctions, which included effectively shutting Iran out of the international banking system.

Iran has had said it wants to use Japanese, South Korean and Swiss banks to handle international trade exempted from Western sanctions under the November deal.

Zarif, who met Japanese Prime Minister Shinzo Abe and Foreign Minister Fumio Kishida Wednesday, said “we reached practical and executive agreement in different areas including the implementation of the financial parts of the Geneva deal, whose results will become clear in banking transactions very soon.”

The official IRNA news agency said Zarif, who posted his remarks on Facebook, also asked Japan to play a “more active role” in freeing up Iranian petrodollars, of which a “large part is in Japan.”

Japan has traditionally been a major importer of Iranian oil.

The same mechanism would be used for revenues from the slightly more than one million barrels per day in oil exports Iran is allowed to make under the agreement, expected to generate some $15 billion (10.9 billion euros).

And it would handle Iran’s petrochemical exports, fully exempted from sanctions, which previously ran at just over $8 billion a year.

In addition, it would be used to manage some $4.2 billion in frozen assets that the European Union and the United States are to release in stages during the next six months.

The United States, other Western powers and Israel have long suspected Iran of using its civil nuclear energy programme as a cover for developing atomic weapons, a charge denied by Tehran.

In return for eased sanctions, Iran undertook to limit enrichment of uranium to five percent purity, halting enrichment to the higher levels that had prompted Western concern on whether its intentions were entirely peaceful.

It also undertook to neutralise existing stockpiles of higher-enriched uranium and to suspend work on a heavy water reactor it had been building.

Talks aimed at reaching a comprehensive and permanent deal are to begin in New York next month.