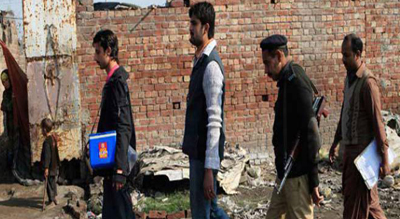 CHAGHI: Three-day anti polio drive has been launched in the towns bordering Afghanistan and Iran here on Monday.

Deputy Commissioner Chaghi district, Saifullah Khaitran inaugurated the drive by administering oral drops to a child in DHO office Chaghi. “As many as 42249 children would be administered anti-polio drops in 11 Union Council and one Town Committee of the district”, DHO Chahgi Dr. Fareedullah Sumalani told.

He said that 158 mobile teams have been formed who would administer polio drops to children below the age of five at 8 transit points, 2 border pints, while 11 fix centers have also been established for the purpose.

Deputy Commissioner Chaghi Saifullah Khaitran while talking to media persons said that government was committed to eleminate the polio menace from Balochistan.

He also urged parents, teachers and tribal notables to cooperate with the visiting polio teams so that the children could be secured from the crippling virus of polio.