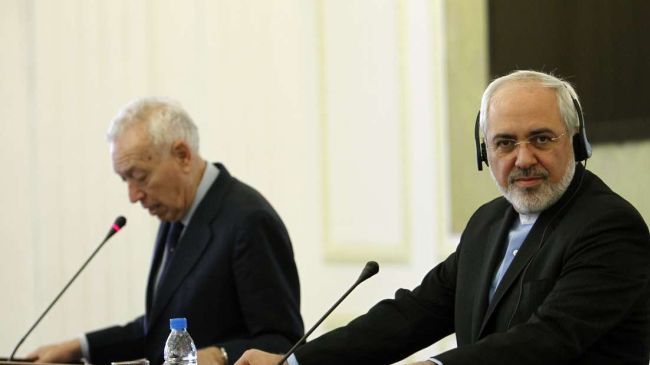 Iranian Foreign Minister Mohammad Javad Zarif says Tehran can be a reliable supplier of energy resources for Spain and other European countries.

Speaking during a meeting with Spanish Foreign Minister Jose Manuel Garcia-Margallo in Tehran on Sunday, Zarif said that there are numerous capacities for cooperation between Iran and the European Union (EU) countries in the current political atmosphere and the potentials should be utilized.

The Iranian foreign minister talked of efforts to set the stage for energy trade with Europe, saying that the broadening of economic relations could benefit both sides.

Highlighting that Tehran-Madrid relations are based on common interests, the top Iranian diplomat expressed hope that ties between the two countries would further expand in the future.

The Spanish foreign minister, for his part, expressed his country’s readiness to bolster cooperation with Iran.

Iran and the P5+1 – Russia, China, France, the UK, the US and Germany – inked an interim deal on the Islamic Republic’s nuclear energy program in Geneva, Switzerland, on November 24, 2013. The Geneva deal took effect on January 20.

Under the accord, the six major world powers have undertaken to lift some of the sanctions against the Islamic Republic in exchange for Iran agreeing to limit certain aspects of its nuclear activities during six months. It was also agreed that no more sanctions would be imposed on Iran within the same timeframe.

Many European countries, including France, Germany and the Italy, have shown interest to enhance their economic relations with Iran, a business powerhouse in the Middle East region, as sanctions imposed against Tehran are partially suspended.