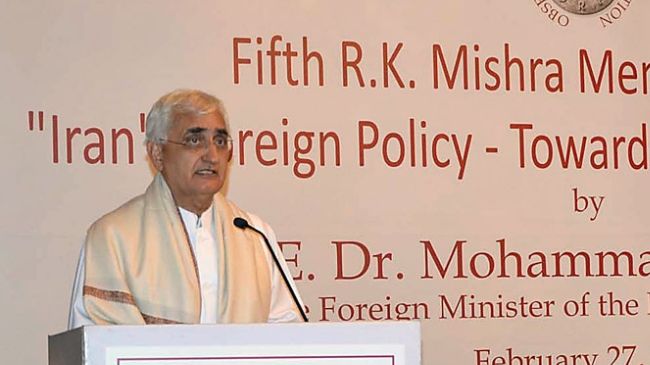 Indian External Affairs Minister Salman Khurshid says no one can deprive Iran of its right to develop nuclear technology for peaceful purposes.

“Iran pursues totally peaceful objectives in its nuclear program and the country is only after justice and equal rights in this regard, and this is an inalienable right for the people of any country and no nation can be deprived of it,” Khurshid said, IRIB reported.

He made the remarks on Thursday during an event at the Observer Research Foundation (ORF) in New Delhi, also attended by Iranian Foreign Minister Mohammad Javad Zarif.

Khurshid said that the administration of Iranian President Hassan Rouhani has been “very successful” in removing the West’s so-called concerns over Iran’s nuclear energy program.

Commenting on bilateral relations, Khurshid said that Iran and India enjoy close and friendly ties especially in the economic and security sectors.

He said India is keen to develop ties with Iran, adding that the development of economic and security relations benefits the two countries and can contribute to regional security.

The Indian minister also highlighted Iran’s status as a significant country in the region, stressing that the Islamic Republic can play an instrumental role in reinforcing social and economic security.

Iranian Foreign Minister Zarif, for his part, said that Tehran was keen to boost ties with New Delhi and said the expansion of ties between the two countries could benefit the region as well.

Zarif is in India on a two-day official visit to hold talks with senior Indian officials on a range of issues. His visit came at the invitation of Khurshid.