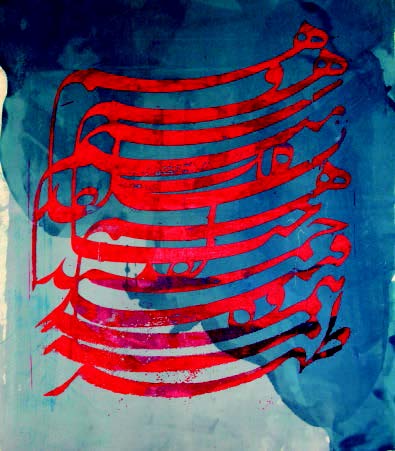 An exhibition blending design and calligraphy

Perhaps only a few people imagined that imprinting Persian alphabet letters or verses from Persian poets on articles of clothing would generate interest among young people.

The various designs that Iranian born Nima Behnoud, the designer of the Nimany brand, uses on clothes has enticed many Iranian youth outside the country to wear these clothes. These pieces of clothing, whether it is a tie, a scarf or a T-shirt, display elements of Iranian art and history, ranging from images of ancient artifacts, headlines of newspapers during the 1979 revolution, Dr Mosadegh, to those of the former king and his queen Soraya. It was this interest that prompted Nima to launch an exhibition of his work at the famed Nicolas Flamel gallery in Paris and play the host to his artistic followers. He calls the exhibit a private collection which he never planned to show to the public because they are not, according to him, “commercial.”

Commenting on this art, prominent Iranian designer and graphics artist Bozorgmehr Hosseinpour has said, “Iran is a land full of colors, shapes, poems, excitement and scents. If an artist wants to create Iranian art then his work must include these features. The outstanding feature of Nima Behnoud’s work is that the artifacts radiate a distinct Iranian scent and aroma when one looks at them. This is more about the Iranian aura, rather than merely its art. For example, the Persian letter “h” that he uses represents the two balls of the Persian eye, which I think is a subtle expression. In Persian, this letter is called the “double-eyed h” (there are two different symbols for the letter h in Persian). It is as if this eye or letter is watching and looking, since it is the only letter that is associated with life. When Nima blows up the image of the letter on clothes and makes it the focus of attention, the look or gaze of the letter becomes even more prominent, as if it animates it with life through the texture, colors and Iranian forms that surround it. He enhances this quality of the living by complementing the letter with Persian Nastaligh calligraphic writing style, which is distinctly Persian. The paintings leave a lasting impression. The compositions and mixtures are exclusive. The images easily overtake the viewer. When you go home after watching these presentations, make sure you tell your wife that it is Iran that has perfumed you.”

The exhibition in Paris brought in Iranians and foreigners. He says reception has different in various cities. “In New York, ninety percent of those who are interested in my work are non Iranians. In London they are all Iranians. I Lebanon, I also have Arab enthusiasts, while in Paris they are mostly Iranians,” he says.

Nima says that he has not “directly or indirectly taken ideas from political and social conditions, even though these issues do impact me like any other Iranian and then they find their way into my work. Some events on the other hand do not impact me at all.”

He does not have a studio in Iran, but has held an exhibition in Tehran. “Some people buy my products in bulk and launch shows in Tehran. But these are private events and there is no official representative. Nimany would certainly welcome a qualified representative,” he says.

His clothing pieces are expensive, even though he does not think so. “I am not willing to lower the price of my products at the expense of loosing quality,” he says, adding that his products have their own special clients.