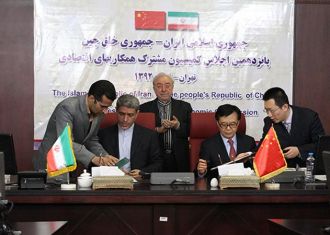 TEHRAN – Iran and China have signed an agreement finalizing a roadmap to double bilateral trade over the course of three years.

On the sidelines of the signing ceremony, the director of the Organization for Investment, Economic, and Technical Assistance of Iran said, “Facilitating the visa issuance procedure for traders and expanding cooperation in the field of e-commerce were among the main issues the two sides agreed upon.”

Establishing an industrial park in Iran and creating a joint shipping line are also part of the roadmap, ISNA quoted Behrouz Alishiri as saying.

The two countries expressed interest in boosting cooperation in a wide range of areas, such as the industrial, oil, gas, petrochemical, mining, banking, transportation, energy, communications, and information technology sectors.

Bilateral trade between Iran and China amounted to $36 billion in 2012.

In December 2013, then Iran-China Joint Chamber of Commerce Chairman Asadollah Asgaroladi announced that annual trade between Iran and China could reach $38 billion by the end of the current Iranian calendar year (March 20, 2014).

A delegation of 110 Chinese traders will travel to Iran on March 2 to attend a conference on investment opportunities in Iran and China, the Mehr News Agency reported on Saturday.

Iran conducted $71.2 billion in trade of non-oil goods with other countries during the first ten months of the current Iranian calendar year, which began on March 21, 2013, according to the latest report issued by Iran’s Customs Administration.

Exports fell by 2.55 percent in value, but rose by 15.33 percent in volume compared to the same period in the previous year.

Iron ore concentrate, urea, and methanol were the main goods exported, and rice, soy meal, and wheat were the main items imported.

China, Iraq, and the United Arab Emirates were the top three importers of Iranian goods during the period. The three countries imported $5.905 billion, $4.79 billion, and $2.923 billion of Iranian goods, respectively.

Meanwhile, the United Arab Emirates, China, and India were the leading exporters of goods to the Islamic Republic. Their exports to Iran were valued at $7.985 billion, $7.365 billion, and $3.298 billion, respectively.