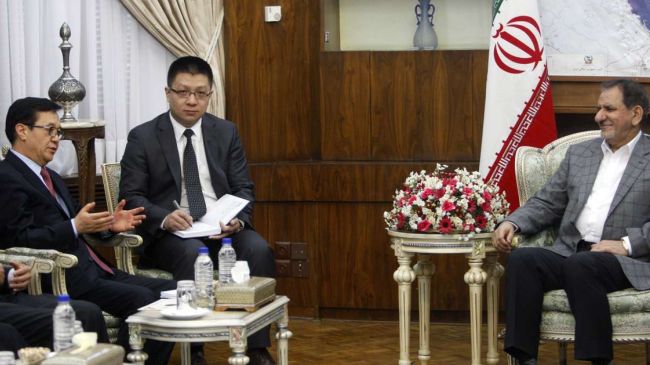 Iran’s First Vice President Es’haq Jahangiri has underscored the importance of continuing trade ties between the Islamic Republic and China, inviting Chinese companies to carry out energy projects in Iran.

“We will not forget countries like China that stood with Iran in difficult days and we would like China to be one of Iran’s main trading partners,” Jahangiri said in a meeting with the visiting Chinese Commerce Minister Gao Hucheng in Tehran on Sunday.

Jahangiri said Chinese companies can have a “major role” in infrastructural projects, mainly in the energy and port sectors.

“Expansion of relations with China has always been one of top priorities of the Islamic Republic of Iran,” he added.

Gao said Iran and China have long had good cooperation in the oil and gas sectors, adding that the two countries can upgrade their energy cooperation.

Iran and China agreed on Saturday to increase the amount of non-oil trade to USD 20 billion a year.

The Chinese commerce minister, who arrived in Tehran on Saturday, is heading a delegation of more than 20 top officials and business leaders, who are taking part in the 15th meeting of the Iran-China Joint Economic Cooperation Commission.

Iran and the People’s Republic of China established diplomatic relations on August 16, 1971.

A 110-member delegation of Chinese investors is expected to travel to Tehran soon to hold talks with Iranian business people.