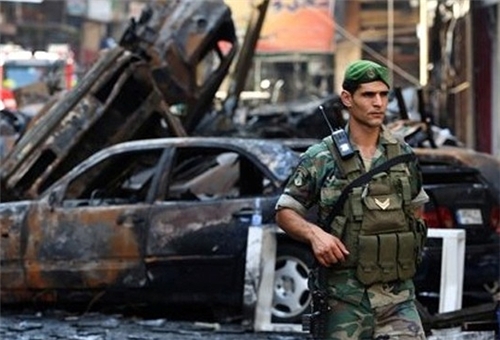 (Reuters) – Lebanese security forces said on Friday they had detained a Sunni Muslim militant suspected of recruiting suicide bombers and assembling car bombs for a radical group behind attacks on Iranian interests in Beirut.

Hassan Abu Afleh, they said, was suspected of being a leading figure in the Abdullah Azzam Brigades – a movement that has carried out bombings to punish Iran and Tehran’s Shi’ite Lebanese ally Hezbollah for their role in the Syrian war.

The Brigades claimed responsibility for Wednesday’s twin suicide attack near the Iranian cultural center in Beirut that killed eight people, and an assault on the Iranian embassy in November.

The near three-year-old conflict has exacerbated sectarian conflicts and galvanized radical groups inside Lebanon, creating a major challenge for the new Lebanese government that took office on Saturday.

Abu Afleh’s arrest in Beirut on Saturday followed last week’s detention of Naim Abbas, another leading militant who, according to a security source, worked for the Islamic State of Iraq and the Levant – a hardline Sunni group that is fighting in Syria.

Abu Afleh was arrested in a predominantly Sunni district of Beirut, said security services. Details had not emerged sooner because of the ongoing investigation, they added.

Another suspected leader of the Abdullah Azzam Brigades died while in the custody of the Lebanese security forces in January.

Majid bin Muhammad al-Majid, a Saudi national who was wanted by authorities in his own country, had been suffering from kidney failure.

The Abdullah Azzam Brigades is named after an associate of the late al Qaeda leader Osama bin Laden.