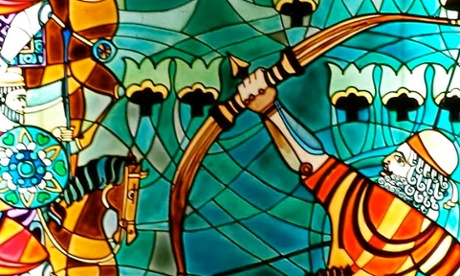 With 22 students in tow, husband-and-wife team make journey from Vancouver to a Tehran stage.

“These … these are the men of Iran … and they say with a heavy heart: ‘What can we do now? For our bows are broken, our arrows have no place and our hands lie trembling.’ It was exactly as they described. For they had returned from a long war.”

So begins the tale of Aurash, as told by writer and director Bahram Beyzaie. The legend of Aurash the archer is woven into Iranian folklore; among the various texts in which it is mentioned is the Shahnameh, the national epic written more than 1,000 years ago by Abolqasem Ferdowsi. In 20th-century Iran, two men brought the legend back to Iranians’ consciousness: Siavash Kasrayi, with a poem in 1959, and the following year by Beyzaie, then just 21, with a script – more precisely, a barkhani: a story to be read aloud.

Despite his wishes, Beyzaie never got to direct a version of his Aurash barkhani for the Tehran stage, but Ghotbeddin Sadeghi finally did in 1999. Sadeghi, given the smallest space in Tehran’s City Theatre complex, the Chahrsou room in the basement, masterfully brought the sweeping story of war and its aftermath to life.

Bahram Beyzaie, Iranian folklore, Quoted, Shahnameh, The legend of Aurash February 22, 2014
7 style tips on how to veil as a traveler In Iran
Iran’s non-oil exports exceed $33b