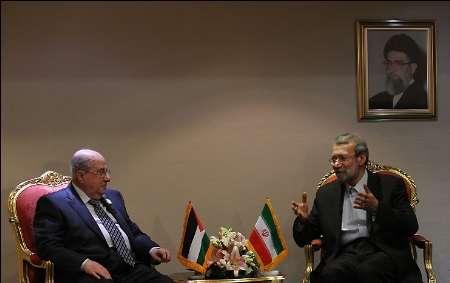 Tehran, Feb 18, IRNA – Palestinian Parliament Speaker Salim Zanoun in a meeting with his Iranian counterpart Ali Larijani in Tehran on Tuesday praised Iran for providing spiritual support for the oppressed people of Palestine.

ˈIran is true supporter of the Palestinians,ˈ Zanoun said.

Zanoun pointed to Iran as pioneer in strengthening and consolidating unity in the Muslim world, and said, ˈThe US and the Zionist regime are trying to divert the international public attention from the Palestinian cause, but Iran has always practically supported us.ˈ

The Palestinian parliament speaker also expressed the hope that the 9th meeting of the Organization of the Islamic Conference (OIC) Inter-Parliamentary Union (IPU) in Tehran will take effective steps for resolving the Palestinian issue and liberate the Occupied Territories from the Zionistsˈ grip.

The Iranian parliament speaker, for his part, said underlined that Iranˈs attitude towards the Palestinian issue is comprehensive and taken from the genuine goals of the Islamic Revolution.

Larijani reiterated that the issue of the Holy Quds is one of most important concerns of the Muslim World, and said, ˈThe focal point of Muslim unity lies in the support for the ideals and the rights of the oppressed Palestinian nation and freedom of the Holy Quds.ˈ

The parliament speaker said that Iranˈs support for the oppressed nation of Palestine is a humanitarian and Islamic duty, and underlined that the Muslim countries should not remain silent towards the savage acts of the Zionists.