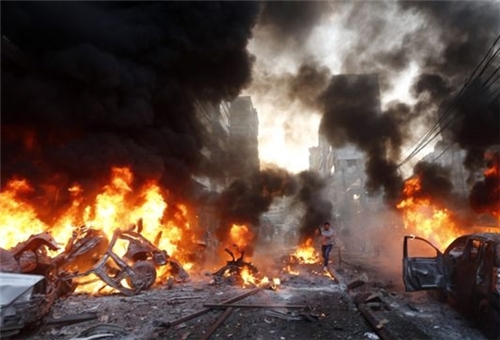 TEHRAN (FNA)- The Syrian government condemned in the strongest terms the coward terrorist act which rocked Bir Hassan area in the Lebanese capital, Beirut, on Wednesday.

Prime Minister Wael al-Halqi said in a statement that the states supporting, fostering and funding terrorism are responsible for the two bombings in Bir Hassan area and other terrorist acts, which constitute a source of instability and worry in Lebanon, Syria and the whole region, Syrian Arab News Agency reported.

Al-Halqi reiterated the need for the UN and the Security Council to fulfill their duties regarding terrorism, which is threatening the world, and to adopt the required resolutions to compel the terrorism-backing states to stop their support to this phenomenon that threatens the security and stability of the world.

Two terrorist explosions took place near a crowded intersection few meters away from the Kuwaiti Embassy. One of the explosions hit opposite to a Lebanese Army barracks near the Iranian Cultural Center.

The death toll from the two bombings rose to 5, in addition to 80 injured.