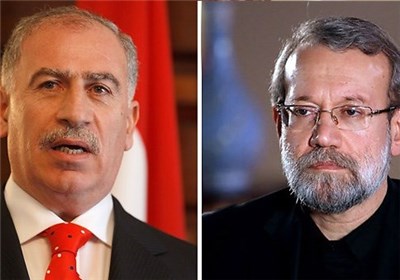 Iran concerned about surge of terrorism in Iraq

“We are concerned about the terrorist acts in Iraq, and hope that the Iraqi government would be able to resolve the security problems as soon as possible,” Larijani said in a meeting with his Iraqi counterpart Osama al-Nujaifi, on the sidelines of the ninth Islamic Inter-Parliamentary Union (IIPU) here in Tehran on Tuesday evening.

The Iranian speaker reiterated that bilateral relations with Iraq are of utmost importance for Tehran, and added, “We will spare no effort to help Iraq settle its problems.”

He further expressed the hope that the expansion of parliamentary relations would further enhance ties between the two countries.

Nujaifi, for his part, thanked Iran for successful hosting of the IIPU meeting, and described the gathering as an appropriate opportunity to address the existing problems in the Islamic world.

“We and the Iraqi people are suffering from the security problems in Iraq, and settlement of our country’s problems requires interaction between the government and the parliament,” he noted.

Violence has surged across Iraq in recent months, reaching its highest level.

According to the UN Mission for Iraq, more than 8,000 Iraqis were killed in 2013. This year, in January alone, some 1,013 people were killed, making it the deadliest month since April 2008.